Update Required To play the media you will need to either update your browser to a recent version or update your Flash plugin.
By Gregory Stachel
13 September 2021


Technology companies that led the change into remote work when the pandemic started are facing a new difficulty: how, when, or if they should bring employees back into the office.

The return to the office has become more difficult because of the spread of the delta variant. Many tech companies had plans to bring employees back around Labor Day, September 6. Microsoft, a major tech company, pushed its date to October. Other tech companies like Apple, Google, Facebook, Amazon, and a growing list of others have already decided to wait until next year.

Since they influenced starting remote work, tech companies' return-to-office policies will likely affect other industries. Laura Boudreau is a Columbia University assistant economies professor. She believes these employers' next steps could redefine where and how people work.

Boudreau says we have moved past the idea that remote work is "a temporary thing." She said it has become harder to tell employees they must return to the office after the pandemic.

Most tech jobs are perfect for remote work because they involve program and online products. Yet, most major tech companies want their employees to be ready to work in the office two or three days a week at the end of the pandemic. 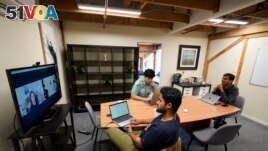 RunX CEO Ankur Dahiya, center, takes part in a video meeting with employees JD Palomino, top left, and Nitin Aggarwal, right, at a temporary office in San Francisco, Friday, Aug. 27, 2021. Technology companies like RunX that led the move into remote work early as the pandemic started, are facing a new difficulty as it calms down: how, when and even if they should bring their employees back to offices that have been made for teamwork. (AP Photo/Eric Risberg)

That is because tech companies believe employees who work near each other are more creative. It is one reason why major tech companies have spent billions to build new offices with appealing common areas.

Christy lake is the chief people officer for business programming maker Twilio. She says there is no research to support the idea that people are more creative when they are together

Twilio is not bringing back most of its 6,300 or so employees to its offices until next year. It also plans to permit most of them to decide how often they should come in.

Nearly two-thirds of the 200 plus companies that were questioned in July in the Bay area, the major tech center in California, said they expect their workers to come in the office two or three days each week.

The Bay Area Council is a business policy group that did the research. It found 70 percent of these employers required their workers to be in the office before the pandemic.

Even Zoom, the video-calling service that became widely used during the pandemic, says most of its employees want to come into the office part-time. Kelly Steckelberg is Zoom's chief financial officer. She recently wrote "There isn't a one-size-fits-all approach to returning to the office."

But the largest tech companies are not giving their employees a choice. Apple, Google, Amazon, and Microsoft have all made it clear they want most of their workers together some days each week to keep their culture.

Ed Zitron runs a public relations firm representing technology companies. It has been fully remote since it began in 2012. He says the only reason to have an office is to make managers happy "so that they can look at them and feel good about the people that they own ... so that they can enjoy that power."

Working part-time in the office is perfect for people like Kelly Soderlund. She is a mother of two young children. She works for the travel management company TripActions in California. She could not wait to return to the offices in June. She missed the mental break that the one-hour trip to work gave between her personal and professional life.

"When I don't have that, I wake up in the morning, I start doing work and I take my kids to their camp or their daycare," Soderlund says. "And then I come back and I work and then we pick them up, make dinner and then I go back to work. So, it feels like it's just work all the time."

Michael Liedtke and Barbara Ortutay reported this story for The Associated Press. Gregory Stachel adapted it for VOA Learning English. Susan Shand was the editor.

remote – adj. connected to a computer system from another place

video – n. of, relating to, or involving moving images that are shown on a television or computer screen

approach – n. a way of dealing with something : a way of doing or thinking about something

manage – v. to have control of (something, such as a business, department, or sports team)