Update Required To play the media you will need to either update your browser to a recent version or update your Flash plugin.
By Anna Matteo
04 September 2021

On this program we explore words and expressions in the English language. We give examples, notes on usage, and sometimes we even use them in a short story.

For this week, we talk about something that we all use – a bed! 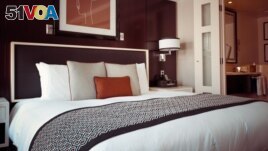 A bed in a bedroom

So, today, we talk about beds. We have several expressions that use this word.

The first one we will talk about involves a flower -- the rose. Imagine sleeping on a bed of roses. Roses smell nice. So, that could be very pleasant, indeed. Well, as long as the roses do not have thorns. Ouch!

Once, I was asked to sing and play the ukulele for a special event. The event was to raise money for a homeless shelter. So, I was happy to volunteer. I did not know the organizer well, but what could go wrong? The ukulele is such a happy instrument.

Well, as it turned out, a LOT could go wrong.

The organizer was actually kind of mean and bossy. First, she picked all the songs, and they were not that great. So, when we suggested other songs, she would yell. She also would yell at us if we played poorly. And this happened often because many of us were just beginners.

Then on the night of our performance, it rained and was very cold. So, only a few people came to hear us play. This put her in a very bad mood. But then something happy happened. Someone in the crowd joined in by playing the flute. But then she yelled at them too!

In the end, I got sick and lost my voice for about a month. So, let me tell you, the whole experience was no bed of roses!

Now, if this woman had been unkind just once, I could say that maybe she "got up on the wrong side of the bed." This means you are in a bad mood. You feel irritable. But it's not your usual way of feeling. Perhaps you just didn't get enough sleep.

However, this woman was unpleasant at every practice. So, it was more than just waking up on the wrong side of the bed. She was just no fun.

Well, months later she needed ukulele players to help in another performance. But none of us joined. Playing the uke, as it is sometimes called, is something we do for fun. And we did not want to get yelled at again.

So, this woman played alone and continues to play alone. You could say, "she made her bed, now she must lie in it." This means that a person has made a difficult situation and then must deal with the results, or consequences.

Usually we say this to someone who has put themselves in the difficulty and then complains about it.

When you use this expression, you can also use the word "sleep." "She made her bed, now she must sleep in it."

And you do not have to say the whole thing. Simply saying, "You made your bed ..." is quite enough.

Finally, bed is where we end up after finishing a long day. So, it is not surprising that we also have a "bed" expression for finishing a project or task. When you "put something to bed" you finish it.

In fact, we are done with this Words and Their Stories. So, it's time to put this episode to bed ... until next time.

thorn – n. a hard sharp leafless point on the stem or branch of a plant (as a rose bush)

ukulele – n. a small guitar of Portuguese origin popularized in Hawaii in the 1880s and strung typically with four strings

flute – n. a musical instrument that is shaped like a thin pipe and that is played by blowing across a hole near one end

consequence – n. something produced by a cause or following from a condition

episode – n. a television show, radio show, etc., that is one part of a series