Beekeeping May Reduce Stress and Depression

Update Required To play the media you will need to either update your browser to a recent version or update your Flash plugin.
By Anna Matteo
23 September, 2019


From VOA Learning English, this is the Health & Lifestyle Report.

Bees are major pollinators of fruits, vegetables and nuts. Without these helpful buzzing insects, our food supply would be in trouble. 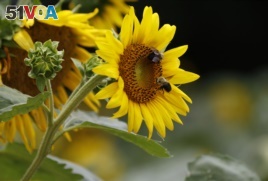 But bees can help humans in another way. Researchers say the act of beekeeping may help people with mental health problems such as stress, anxiety and depression. Many call it "beekeeping therapy."

One group of people is especially getting help from such therapy: military veterans.

Many soldiers returning from military service have trouble dealing with the experiences of war. They may also have trouble creating a productive life after the military. Homelessness, depression and drug abuse can affect some military veterans.

Vince Ylitalo is one such veteran. He served in the military for nearly 40 years, including two tours in Iraq. He suffers from Post-Traumatic Stress Disorder, or PTSD.

To treat his PTSD, Ylitalo is part of a beekeeping program at the Manchester Veteran Affairs (VA) Medical Center in the state of New Hampshire. The VA has set up several such programs in the United States.

In a recent report by the Associated Press, Ylitalo explained how beekeeping calms his mind.

"I'm in this program to help me get out of the thought process of all those problems that I have. It helps me think about something completely different ... I'm just thinking about the bees."

Another veteran in the beekeeping program is Wendi Zimmerman.

She also says that beekeeping calms her mind. She calls the uncontrolled, unwanted thoughts from the past "clutter." She said the buzzing of the bees helps to clear the clutter. 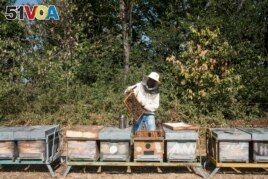 Another beekeeping program based in the state of Michigan is Heroes to Hives. Adam Ingrao, a military veteran and insect expert, founded that program.

"All of these bees will die. These are our summer bees. And they only live 45 to 60 days."

He runs it through Michigan State University. The free program provides a nine-month beekeeping course to veterans.

Ingrao explains that beekeeping serves veterans in many ways.

Beekeeping for soldiers returning from WWI

Beekeeping programs aimed at helping military veterans are not a new thing. In fact, the U.S. government had a program that taught beekeeping to soldiers returning from the First World War. Other countries at that time had similar programs.

There is little scientific evidence that beekeeping helps with PTSD or other mental health conditions. But that does not seem to matter to those who find comfort in beekeeping.

Veteran and beekeeper Frank Bartel does not need a study to prove the effectiveness of beekeeping therapy. For him, watching the bees relaxes his brain.

"When things get really hectic, crazy and you want to relax, you just put your chair out in front of the bee hive and watch them go in and out. And it's so relaxing. All your cares just float away."

On the website Harvard Health Publishing from the Harvard Medical School, researchers note studies that show the brain benefits of watching nature.

They write that those people who take a walk in nature, for example, would show less activity in their prefrontal cortex. This area of the brain is active during repetitive thoughts that lead to bad feelings.

And that's the Health and Lifestyle report. I'm Anna Matteo.

"This is just a beautiful hive."

Here is the AP video report upon which this adapted story is based.

Anna Matteo adapted this story based on an AP report. The interviews came from that story as well. Ashley Thompson was the editor.

pollinator – n. one that gives (a plant) pollen from another plant of the same kind so that seeds will be produced

veteran – n. a former member of the armed forces

post-traumatic stress disorder (PTSD) – n. a mental disorder that can occur in people who have experienced or witnessed a disturbing event such as a natural disaster, a serious accident, a terrorist act, war/combat, rape or other violent personal assault

comfort – n. a state or feeling of being less worried, upset, frightened, etc., during a time of trouble or emotional pain

relax – v. to become or to cause (something) to become less tense, tight, or stiff

float – v. to be carried along by or as if by moving water or air