Update Required To play the media you will need to either update your browser to a recent version or update your Flash plugin.
By Rachel Dennis
31 January, 2018


People in Mayilattumpara, a village in southwest India, could not sleep at night.

Because of habitat loss, wild elephants would enter their village to look for food, destroying crops and farmland.

The villagers tried to keep the wild elephants out with electric fences, deep holes and plants believed to keep the animals away. They even tried beating drums. Nothing worked!

The repeated destruction of crops led some villagers to stop farming. But the situation turned around last year.

That is because residents have finally found what keeps the elephants away: honey bees.

Elephants, it turns out, are afraid of loudly buzzing bees and their stings.

A wire fence holding beehives now stretches along the border of the village. When elephants try to pass the 2.5 kilometer wire fence, angry bees swarm out and the elephants quickly flee, people in the village say.

Protected by the bees, farmers have returned to growing their crops. Some even started to cultivate honey.

The idea started in Africa 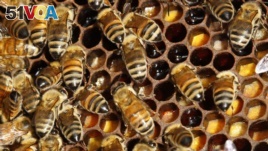 Are honey bees the natural enemy of wild elephants?

He said the idea for the fence came from the work of an Oxford university researcher, Lucy King. In 2008, King successfully tested whether honeybees would keep elephants away from areas in Kenya. Researchers in Tanzania had the same success.

Roy wondered, "If it could (work) in the African forest, why couldn't it in the Kerala forest?" So, he worked with the farmer's association in Mayilattumpara to start the experiment.

The fence cost about $8,000 with funding from the ATMA.

Johny Kochery has 9 hectares of farmland in the village. He said setting up the fence and beehives was not easy. The farmers needed to find the most effective fence and hive system. They also needed to learn how to replace diseased colonies, care for the bees and deal with the cost of keeping up the system.

Kochery said that last season the farmers were not able to make a profit. But this year they hope to have a big harvest.

The results of this experiment have encouraged farmers from other areas to try similar projects. The government also has been working to resolve conflict between humans and elephants by reducing deforestation and improving the elephants' natural habitat.

E.A Jayson is a scientist with the Kerala Forest Research Institute. He said the fencing seems to keep the elephant away. But there are now new problems to solve.

"We have met with incidences of theft of beehive boxes," Jayson said.

Rachel Dennis adapted this story from a Reuters news report for VOA Learning English. Hai Do was the editor.

habitat –n. the place where wildlife naturally lives or grows

stings –n. an injury caused by the sting of an animal like a bee, the sharp part of the body of some animals that can sting

swarm –n. a large group of insects moving together

cultivate –v. to look after and care for

encourage –v. to make someone more willing to do something