Update Required To play the media you will need to either update your browser to a recent version or update your Flash plugin.
By Andrew Smith
10 January 2023


In Belgium, a non-governmental organization called Dung Dung is recycling human hair to protect the environment.

The Hair Recycle project puts the hair into a machine that turns it into square mats. The mats can be used to absorb oil or other kinds of pollution found in water. The hair can also be used as part of the material for special containers. 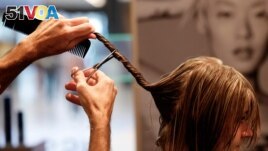 Patrick Janssen is the co-founder of Dung Dung. He said that one kilogram of hair can absorb seven to eight liters of oil or similar chemicals called hydrocarbons. He said the mats can help absorb pollution in water before it reaches a river.

"Our products are all the more ethical as they are manufactured locally...they are not imported from the other side of the planet," he told the Reuters news agency. "They are made here to deal with local problems."

The project said on its website that hair has powerful qualities. One piece of hair can support up to 10 million times its own weight. In addition to absorbing fat and hydrocarbons, it does not break down in water and is able to stretch a lot.

Isabelle Voulkidis is the supervisor of a hair care business in Brussels. She is one of the hair dressers across the country who pays a small fee to the project to collect their hair cuttings.

She said she wants to help the project because she knows how much can be done with the hair.

recycle –v. to reuse something, or the material in it, to reduce waste

coiffeur –n. (foreign word, not usually used by Americans) a person who cuts other peoples' hair and makes it look nice

sweep up –v. (phrasal) to remove dust or dirt by using a tool such as a brush or broom

customer –n. a person or group that pays for goods or services from a business

mat –n. a flat piece of material, usually square, that is often placed on the ground as a floor covering

absorb –v. to take in liquid slowly and hold it