Update Required To play the media you will need to either update your browser to a recent version or update your Flash plugin.
By Susan Shand
21 November, 2018

A new FAO store opened last Friday in world famous Rockefeller Center. It is about 10 streets from its former home near Central Park.

For more than 150 years, FAO Schwarz was known in New York for its high-class and sometimes high-priced toys.

The Fifth Avenue store opened in 1986.

But financial problems at the parent company and rising rents forced that store to close in 2015.

Now, FAO Schwarz is pulling back from the worst financial crisis since it was founded in 1862. In recent weeks, laborers worked 24 hours a day at 30 Rockefeller Plaza to get the new store ready. 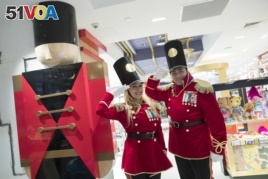 In this Tuesday, Nov. 13, 2018 photo, FAO Schwarz toy soldiers dressed in uniforms designed by model Gigi Hadid pose for a photo during a media preview of the new FAO Schwarz store at Rockefeller Center in New York. (AP Photo/Mary Altaffer)

Workers filled the nearly 2,000 square meter space with hundreds of stuffed animals: bears, elephants and more. The new store has the large clock that once occupied the entrance to the old store. And the building's second floor has a large piano keyboard. It looks just like the one on which Tom Hanks danced in the 1988 movie "Big." By the way, copies of the more than 6-meter-long instrument sell for $128.

There is also a toy food-market, where children can shop among plastic fruit.

For $75, another interactive play station shows children to care for baby dolls, while a "nurse" explains how to hold them. A 9-meter tall rocket is filled with stuffed bear astronauts.

"We are all about experiences. That's what's different from other toy stores," said FAO's David Niggli.

Other smaller, but temporary FAO stores are also opening for Christmas in England, Spain and Australia. A March opening is planned for a permanent store in Beijing. The company has announced plans for smaller stores in airports and other places across the U.S. and Canada.

The business was started in 1862 by Frederick August Otto Schwarz, a German immigrant to the United States. He sold high-end toys, many imported from Europe.

In the 20th century, the store became famous for selling pricey, high-end toys. The new store continues to sell such products, like a child-size, driveable Mercedes Benz. It sells for $25,000. But there are plenty of less costly toys, too.

"I think that's part of what you come to FAO to see. It's part of the magic," said Niggli.

rent – n. permission to use something or occupy a building in exchange for money

stuffed – adj. filled with soft material or something else

shop – v. to examine products in search of the best product for the price

keyboard – n. a row or set of keys that are pushed to play a musical instrument (such as a piano) — sometimes used before another noun

magic – n. tricks that seem to be impossible and that are done by a performer to entertain people

doll – n. a plastic baby played with by children