Berlin Wall to Be Recreated in Germany’s Capital

Update Required To play the media you will need to either update your browser to a recent version or update your Flash plugin.
By Bryan Lynn
02 September, 2018


A group of artists and filmmakers plans to recreate Germany's historic Berlin Wall.

The Berlin Wall was built by communist East Germany. It divided Berlin from 1961 to 1989. 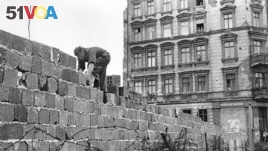 A policeman in East Berlin works on the Berlin Wall on October 9, 1961. (AP Photo/Archiv)

Organizers say they will build a model of the Berlin Wall inside a small, closed-off area in the center of the German capital. The design will aim to create a feeling that visitors are inside a "city within a city."

The project is called DAU: Freiheit, or "Freedom." Event organizer Berliner Festpiele recently announced the project. It is set to open on October 12 in Berlin's Under den Linden area. The project still needs final approval from city officials.

The closing is planned for November 9. Event organizers say the wall and exhibits will be taken down that day. The date is meaningful; the real Berlin Wall began to come down on November 9, 1989.

Organizers have called the project "a social and artistic experiment." Visitors will have to buy "visas," the Associated Press reported. The visas will cost about $17.50.

Once inside, visitors will be asked to hand over their phones. They will then be be given another device to carry. This device will guide each person through different exhibits, including film presentations, music and performance art. 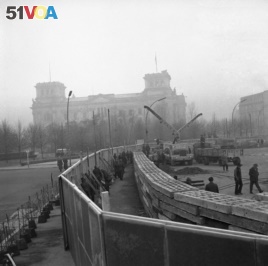 This Nov. 20, 1961 photo shows 12 feet high boards hiding the work as East German troops erect a new concrete wall at the Brandenburg Gate, marking the East-West border in Berlin. In background is the former Reichstag building which is in West Berlin. (AP Photo)

The aim of the experience is to begin "a political and social debate about freedom and totalitarianism, surveillance, co-existence and national identity," organizers told the Agence France-Presse news agency, or AFP.

Germany's minister of culture, Monika Gruetters, said she hopes the project will turn into a successful "world event."

But some critics expressed concern that recreating the Berlin Wall could be hurtful to some people who lived in communist East Germany.

"Out of respect for the victims who really experienced such situations, we should step away from this," Berlin politician Sabina Bangert told Germany's Tagesspiegel newspaper.

The event will be used to launch the first showing of a film project by Russian filmmaker Ilya Khrzhanovsky. The DAU film project has been in development for the past 10 years.

DAU involved hundreds of actors living full-time from 2009-2011 in an environment modeled after a former nuclear research facility in the Soviet Union, the AFP reported. The actors who lived in the facility – which was built in Ukraine – were asked to dress, speak and act as if they were actually living under a communist Soviet government.

Bryan Lynn wrote this story for VOA Learning English. His story was based on reports from the Associated Press, Agence France-Presse and other sources. Ashley Thompson was the editor.

exhibit – n. collection of objects placed in one place for people to see or inspect

totalitarianism – n. political system in which the people in power have complete control and do not allow any opposition

surveillance – n. the careful watching of something or someone, especially by police or the government

respect – n. feeling or understanding that someone or something is important, serious, etc., and should be treated in an appropriate way