Best US Beach? 'Dr. Beach' Says Hawaii's Got It

Update Required To play the media you will need to either update your browser to a recent version or update your Flash plugin.
By VOA
27 May, 2016

Dr. Beach is coastal scientist Stephen Leatherman of Florida International University. He has been reviewing beaches since 1991. He considers 50 conditions in preparing his list. They include including water and sand quality as well as "safety and management."

Hanauma Bay Beach Park is in the eastern end of Oahu, about 20 kilometers from Honolulu, Hawaii's capital. Dr. Beach says the bay has the best accessible snorkeling in the area. Dr. Beach says it has "thousands of beautifully colored tropical fish which span the rainbow."

Among others on his "top 10" list: Siesta Beach, in Sarasota, Florida; Ocracoke on North Carolina's Outer Banks; Coast Guard Beach on Cape Cod in Massachusetts and San Diego's Coronado Beach in California.

Dr. Beach also gives "bonus points" for beaches that ban smoking, like Hanauma Bay. The website notes that, in recent years, "more emphasis is being placed on environmental management and beach safety."

The yearly list is released at the start of Memorial Day weekend in the United States. The holiday signals the unofficial start of summer recreational activities.

Monday is Memorial Day. The federal holiday that honors the memory of all the nation's war dead. 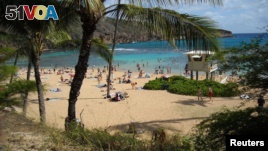 FILE - Sunbathers and snorkelers enjoying a beach day at Hanauma Bay, on the east side of Oahu, Hawaii.

management - n. the act or process of controlling and dealing with something

accessible - adj. able to be reached or approached

snorkeling - v. to swim underwater while using a snorkel

bonus - n. something good that is more than what was expected or required

emphasis - n.special importance or attention given to something