What Is the Best Way to Teach English?

Update Required To play the media you will need to either update your browser to a recent version or update your Flash plugin.
By VOA
08 October, 2016


The U.S. government's top education official wants schools to do a better job teaching students whose first language is not English.

U.S. Education Secretary John King said the issue is important. That is because one in every 10 U.S. students from grades Kindergarten to 12th grade are English learners.

Most English learners arrive from a country that speaks another language, or have parents from a non-English-speaking country.

There has been progress in recent years, King said. He noted Spanish-speaking students are graduating high school and attending college at higher rates than ever before. 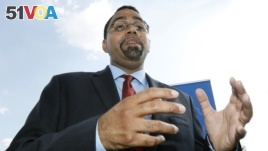 Kelly Gonez is a policy adviser at the Department of Education.

She said research shows giving instruction in two languages, English and the student's native language, is better for English learners.

Although it takes them a little longer to master English, they do better on tests that measure reading and math skills, Gonez said.

So do people who enter dual-language programs already proficient in English, Gonez said. To be proficient means able to read and speak a language.

Sarah Catherine Moore is director of online learning at the Center for Applied Linguistics in Washington D.C.

She said two recent studies found English learners do better if they attend classes that use both English and the student's native language.

But Gonez said such programs are still not offered by a majority of schools teaching English learners.

One problem is finding enough qualified teachers. Gonez said some school districts are hiring teachers from Spain and China. They are trying to make up for a shortage of teachers in the United States who can offer instruction in two languages.

But such programs are not always easy to set up.

In New York City, for example, the city's Department of Education says its students speak a total of 180 different languages.

It also has 6,546 students who speak Bengali, 6,501 who speak Arabic, and 3,591 who speak Haitian-Creole. Thousands more speak Russian or Punjabi.

Gonez said that it may be hard to find instructors who can speak all the different languages spoken by students. But she said schools can get educational material in many more languages than just Spanish and Chinese.

Terry Richards is in charge of federal programs for the state of Delaware. She welcomes the new federal education law. It will allow state and local education departments to make more decisions about how to teach English learners, she said.

We want to hear from you. Write to us in the Comments Section and share your views on 51VOA.COM. Tell us how you learned to speak another language!

access -- n. a way of being able to use or get something done

resources -- n. a supply of something (such as money) that someone has and can use when it is needed

hire -- n. to give work or a job to (someone) in exchange for wages or a salary

qualified -- adj. having the necessary skill, experience, or knowledge to do a particular job or activity

instruction -- n. the action or process of teaching