Bethlehem Filled With Christmas Tourists for First Time Since 2019

Update Required To play the media you will need to either update your browser to a recent version or update your Flash plugin.
By Dan Friedell
15 December 2022


Visitors are returning to the West Bank city of Bethlehem this Christmas season, after a two-year absence because of COVID-19.

At this time last year, most stores and tourist places in the Middle Eastern city of Bethlehem were closed. The town in the Israeli-occupied West Bank is holy to Christians. Most believe Jesus was born there about two thousand years ago on December 25.

Christmas season visitors last filled the streets of Bethlehem in 2019. They stayed away in 2020 and 2021 because of the COVID-19 pandemic. 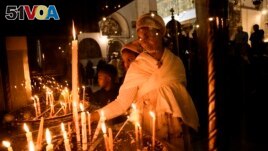 An Ethiopian woman and her child visit the Church of the Nativity, traditionally believed to be the birthplace of Jesus Christ, in the West Bank town of Bethlehem, Saturday, Dec. 3, 2022. Business in Bethlehem is returning after the pandemic. (AP Photo/ Mahmoud Illean)

But this year, visitors are coming back. The city's hotels are fully booked.

Days ago, visitors from almost every continent posed for photos in front of the Church of the Nativity. The 1, 500-year-old church stands on the site where Christians believe Jesus was born.

Elias Arja is a hotel owner and head of the local hotel owner's business group. He said he thinks business will continue to be good into 2023 because "Christian religious tourists especially, they all want to return to the Holy Land."

Next to the Church of the Nativity is an area called Manger Square. There, a large Christmas is tree is shining brightly with hundreds of colored lights. Visitors went into stores to buy religious objects, such as crosses made from olive wood.

Saliba Nissan makes the crosses in the wood factory he owns with his brother. Because of the pandemic, he said, "the city became a city of ghosts."

The Israeli Tourism Ministry said it expects 120,000 Christians to come during the Christmas week. A record-setting 150,000 tourists visited in 2019.

Bethlehem's mayor is Hanna Hanania. "God willing," he said, "we will go back this year to where things were before coronavirus."

He said about 150,000 people came to the recent Christmas tree-lighting. "Recovery has begun," he added.

Visitors are coming back to Bethlehem at the end of a violent year in the larger area. Fighting between Israelis and Palestinians left a reported 150 Palestinians and 31 Israelis dead in the West Bank and east Jerusalem. That makes 2022 the deadliest year in the conflict since 2006.

However, the year's violence does not concern business owners as much as the pandemic does.

They note that the fighting has continued since Israel took over the area during a war in 1967. Sometimes the fighting increases, they say, sometimes it slows down.

Bassem Giacamen's family has owned the Blessing Gift Shop since 1925. He said none of the fighting was as bad as the pandemic. He once had 10 people working for him, now it is five, and sometimes fewer.

"The political situation," he said, "does affect, but nothing major. We've had it for 60, 70 years, and it goes on for a month, then it stops, and tourists come back again."

absence –n. the state where something that is expected does not exist

tourist –n. a visitor who comes to see a place from another country

book –v. to ask for a room or reservation at hotel or restaurant

pose –v. to present yourself for a photo

ghost –n. something that is thought to be the soul of a dead person in the world of the living; a way of saying something is no longer busy or active