Update Required To play the media you will need to either update your browser to a recent version or update your Flash plugin.
By Dr. Jill Robbins
28 August 2020


Today we answer a question from Ahmed in Egypt. He writes:

I would like to know the exact meaning of beyond and its uses and the difference between it and behind. Thanks in advance.

Thank you for writing. While the words "beyond" and "behind" are similar, there are important differences between them.

"Beyond" can be an adverb – a word that changes the meaning of a verb, or a preposition, a word that shows location. As an adverb, it means at a further distance, as in this example:

From my window, I can see the city lights and the mountains beyond.

It can also mean to or until a later time, or in the future, as in this sentence:

People need to know math through their school years and beyond.

In the "Toy Story" movies, the astronaut Buzz Lightyear has a favorite saying,

To infinity and beyond!

That expression means he is willing to go very far in exploring space.

As a preposition, you can use "beyond" to talk about a place or location at a greater distance than when using the word "behind."

There was a dog barking behind the fence, and beyond him two children were playing.

"Behind" can be used an adverb, preposition, or noun. As an adverb, it means in or toward the back of something. For example, you may have seen a family of ducks walking in a line:

The mother duck came first, with the baby ducks following behind. 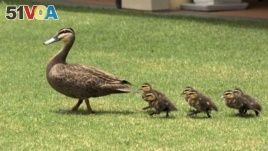 Duck & Ducklings out for a Morning Walk, Hervey Bay Australia

But note that you could not use "beyond" in that sentence. Another use of "behind" is when describing something that is not happening on time.

During the pandemic, many people got behind on their rent.

That is, the rent payments were arriving late. You probably are familiar with the use of "behind" as a preposition, meaning at the back or rear of something. But it can also mean in the past, as in these examples:

After winning the lottery, her financial problems were all behind her.

Your old clothes are just behind the times.

Now, let me test your understanding of "behind" and "beyond" in a quiz. Choose the right words to complete this sentence:

Mail deliveries usually fall ______ around the winter holidays, but they improve ______ the new year.

Are you ready? If you chose "behind" for the first blank and "beyond" for the second blank, you know the difference.

I hope that helps to answer your question, Ahmed.

rent – adj. related to or involving payments for the use of something

lottery – n. way of raising money for a government or group in which many tickets are sold and a few of the tickets are chosen by chance to win prizes

ticket – n. a piece of paper that gives the holder a right, especially to enter a place, travel, or take part in an event.

quiz – n. a test of knowledge