Update Required To play the media you will need to either update your browser to a recent version or update your Flash plugin.
By Mario Ritter Jr.
16 June 2021


The U.S. Department of Education said Wednesday that it is cancelling the student loans of thousands of borrowers who attended a big, for-profit college.

The loans were taken by students attending an educational organization called ITT Technical Institute, which had 130 campuses around the country.

The college was found to have made misleading claims about its graduates' success in finding jobs. ITT Technical Institute closed in 2016 after the administration of former president Barack Obama barred it from accepting new students. 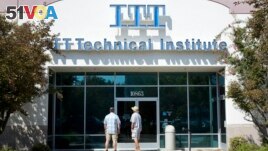 FILE - Students find the doors locked to the ITT Technical Institute campus in Rancho Cordova, Calif. The U.S. Education Department says it's erasing student debt for thousands of borrowers who attended a for-profit college chain that made exaggerated cla

The Biden administration announced Wednesday that it is cancelling 18,000 loans of former students of ITT Technical Institute. The federal government's cost of cancelling the loans is expected to be more than $500 million.

The move marks a step by the Biden administration to deal with a lot of claims made through the borrower defense program. The program was not used often until the Department of Education expanded rules for cancelling loans in 2016. It provides loan forgiveness to students with federal student loans who were defrauded by their colleges.

During the administration of former President Donald Trump, the government placed higher requirements for students seeking loan forgiveness. It is estimated that there are now more than 100,000 claims waiting to be processed.

"Our action today will give thousands of borrowers a fresh start and the relief they deserve," Cardona said in a statement.

The action follows an earlier loan cancellation in March. At that time, the Education Department cancelled $1 billion in federal student loans for 72,000 borrowers. Those claims all came from former students of for-profit colleges.

Activists were pleased with the new approvals, but called for fast action for thousands of other students with claims.

Alex Elson is vice president of Student Defense, a Washington legal group. He said the administration appears to want to help the students. But he said he did not understand why officials were slow "to immediately and automatically help the countless additional borrowers who are still waiting."

Borrower defense is among several education programs targeted for changes by the Biden administration. Cardona is holding a series of hearings this month as his agency considers changes to that policy and others.

In 2015, the Education Department received thousands of claims from former students of Corinthian Colleges. The group of for-profit colleges shut down after findings that it lied to students about job placement rates.

After the collapse of Corinthian and other for-profit colleges, the Obama administration moved to make it easier for students to get loans cancelled. The Trump administration later wrote its own rules. Former Education Secretary Betsy DeVos said it had become too easy to get loans forgiven.

In March, Cardona withdrew a rule that permitted the Education Department to only partially cancel student loans. All borrowers with approval will now get their loans fully cleared.

Many of the 18,000 claims from ITT Tech were approved after the Education Department found that the company lied about graduates' chances of getting a job. The agency said ITT made "repeated and significant misrepresentations" about its ability to help students. In reality, the departments said many students said it was harder to find employment when they listed ITT while seeking jobs.

Collin Binkley reported this story for the Associated Press. Mario Ritter Jr. adapted it for VOA Learning English. Susan Shand was the editor.

defraud –v. to trick or cheat someone in order to get money

campus –n. the area around a university, college or school

relief –n. the removal of something that is painful or unpleasant

automatically –adv. done without thought or effort; always done because of a rule or law

transfer –v. to stop going to one school and begin going to another; related to changing the use of something so that it can be used in another place (such as college credits)