Update Required To play the media you will need to either update your browser to a recent version or update your Flash plugin.
By Alice Bryant
06 August 2021


U.S. President Joe Biden signed an executive order Thursday to make half of all new vehicles sold in 2030 carbon-free. He also proposed new vehicle-emission rules to cut pollution through 2026.

Biden's goal won the support of major U.S. and foreign carmakers. But carmakers also said the change would require billions of dollars in government funding.

"We have got to act," U.S. Transportation Secretary Pete Buttigieg said in an interview on the television business news channel CNBC. The 10-year goal, he added, is urgently needed for the country to meet its climate goals. 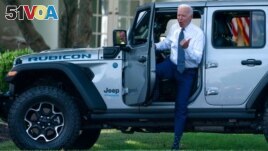 President Joe Biden gets out of a Jeep Wrangler Rubicon 4xE on the South Lawn of the White House in Washington, Aug. 5, 2021.

In a joint statement, three major car companies based in Detroit, Michigan, said they would seek to have 40 to 50 percent of new vehicle sales by 2030 be electric models. The companies were General Motors, Ford and Chrysler's parent company, Stellantis NV.

Biden has repeatedly resisted calls from many Democrats to make electric vehicles a requirement. He has also resisted following the state of California and some countries in setting 2035 as the final year for selling new gasoline-powered light duty vehicles.

The United Auto Workers (UAW) union has pushed back against such aims. UAW President Ray Curry said his group wants to keep in place jobs "that have been the heart and soul of the American middle class."

Biden's order sets a new date for making new emissions rules through at least 2030 for light duty vehicles. For larger vehicles, it could be as early as 2027.

Dan Becker is director of the Safe Climate Transport Campaign. He noted that Biden's order is not backed by law. Car companies would need to make changes voluntarily. He compared the non-legality of the order to a person making a New Year's resolution. In other words, the companies would only have to answer to themselves.

The three carmakers in Detroit said they can only meet the high EV sales goals with billions of dollars in government incentives. They said the incentives would need to include aid to car buyers, EV charging networks, investments in research and more.

South Korean carmaker Hyundai said it supports the 40- to 50-percent electric vehicle sales goal by 2030. Toyota said in a statement the goal was "great for the environment" and that it would do its part.

Biden has called for $174 billion in government spending to increase EVs, including $100 billion in buyer incentives. A Senate infrastructure bill includes $7.5 billion for EV charging stations. But it does not include money for new public incentives.

emission – n. the act of producing or releasing something (such as energy or gas) from a source

union – n. an organization of workers formed to protect the rights and interests of its members

resolution – n. a promise to yourself that you will make a serious effort to do something that you should do

incentive – n. something that encourages a person to do something

infrastructure – n. the basic equipment and structures (such as roads and bridges) that are needed for a country or region to function properly