Update Required To play the media you will need to either update your browser to a recent version or update your Flash plugin.
By Hai Do
08 April 2021

Two mass shootings in the United States last month killed 18 people. One attack took place at a food store in Boulder, Colorado. The other happened at three businesses in and near Atlanta, Georgia.

Biden said the Justice Department will issue a rule to stop the quickly increasing number of "ghost guns." These guns are often put together from available parts in as little as 30 minutes. They are not registered weapons and often cannot be traced by law enforcement. USA Today reported that ghost guns have been used in at least three recent shootings in California. 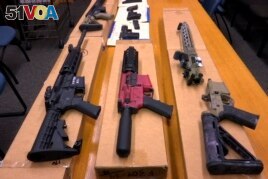 FILE - This Nov. 27, 2019, file photo shows "ghost guns" on display at the headquarters of the San Francisco Police Department in San Francisco.

The Justice Department is also planning to issue a new rule on a device called a stabilizing brace. The device can make a handgun work more like a rifle, a deadlier firearm. The new rule would make it difficult to register the weapon.

"Red flag laws can stop mass shooters before they can act out their violent plans," Biden said.

The president noted that his administration is also investing in local communities to help prevent gun violence. He said that gun violence is severely hurting America's children, including those who do not experience direct involvement.

And, Biden announced his nomination of David Chipman to serve as Director of the U.S. Bureau of Alcohol, Tobacco, and Firearms, or ATF. Chipman worked at the agency for 25 years and is now an advisor to a gun-control organization.

While at ATF, Chipman worked to stop a gun trafficking group that sent illegal firearms from Virginia to New York. He also served on the ATF's special weapons defense team.

Chipman is a gun owner.

Acting directors have headed the ATF for years. If confirmed, Chipman will become the agency's first permanent leader since 2015.

The National Rifle Association moved quickly to denounce Biden's gun-control measures. The organization said Thursday, "These actions could require Americans to surrender lawful property," adding that states might use the measure to increase firearm seizures. The group said on Twitter, "It's time to STAND and FIGHT!"

John Feinblatt, president of Everytown for Gun Safety, praised the administration's new measures as a starting point for dealing with gun violence. The new laws, he said, "begin to make good on President Biden's promise to be the strongest gun safety president in history."

In his speech, Biden noted some limitations of his executive orders. He asked the Senate to immediately pass current bills from the House of Representatives that require background checks and longer waiting periods on gun purchases.

"They have offered plenty of thoughts and prayers, but they have passed not a single federal law to reduce gun violence," Biden said. "Enough prayers. Time for action."

embarrassment - n. the state of feeling foolish in front of others

determine - adj. certain to do something

trace - v. to find out where something came from