Update Required To play the media you will need to either update your browser to a recent version or update your Flash plugin.
By Dan Friedell
12 July 2021


American President Joe Biden asked Cuban leaders to listen to the people after thousands marched to protest food shortage and high prices during the pandemic.

In a statement, Biden said: "We stand with the Cuban people and their clarion call for freedom." Biden also called on the Cuban government to "hear their people and serve their needs."

On Sunday, thousands of Cubans marched in the capital city of Havana saying "Freedom," "Enough" and "Unite." The protests came as people complain about food supply, financial problems and a lack of access to a COVID-19 vaccine.

The Associated Press said one man, who did not want to be named because he was worried about being arrested, said "we are fed up" with the lack of supplies and the constant waiting in line for basic services.

Experts who follow Cuba say the protests were the biggest in about 30 years.

Cuba is in the middle of its worst crisis in many years due to the combination of restrictions from the international health crisis and economic penalties – known as sanctions - imposed by the administration of former U.S. President Donald Trump. 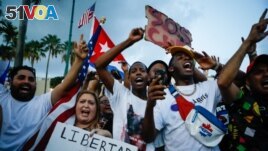 Protesters hold a sign that says "freedom for Cuba" on Sunday.

The Cuban government blamed the protests on the U.S. economic sanctions and said a U.S.-based social media campaign stirred up the emotions of its people. Mexican President Andres Manuel Lopez Obrador also asked the U.S. on Monday to end its economic restrictions to help the Cuban people.

The largest protest in years

On Sunday, thousands of Cubans marched on Galeano Avenue in Havana as police tried to move the crowd by using tear gas. People living alongside the street watched and cheered the protesters.

A group of about 300 pro-government protesters also arrived, making statements in support of former Cuban leader Fidel Castro and the Cuban Revolution of the 1950s.

The Cuban government shut down the internet on Sunday to prevent people from sending live videos with their mobile phones.

After about two-and-a-half hours, some people pulled stones from the streets and threw them at the police. At that point, the Associated Press reports about 20 people were taken away by police.

Jorge Luis Gil is a Roman Catholic priest who watched the protest.

"The people came out to express themselves freely and they are repressing and beating them," he said.

Cuban President Miguel Diaz-Canel denounced the behavior of people who threw stones at police and government-run shops. He said pro-government supporters restored order after they received instructions to fight back and "defend the revolution."

Those critical of Cuban leaders said the country's problems continue because it follows a Soviet Union-style government system.

Dan Friedell adapted this story for Learning English based on reports by the Associated Press and Reuters. Susan Shand was the editor.

What would you do if you lived in Cuba right now? Would you try to leave? Tell us in the Comments Section and visit 51VOA.COM.

impose – v. to cause (something, such as a tax, fine, rule, or punishment) to affect someone or something by using your authority

stir up – v. to cause an emotion or reaction

instruction – n. an order or command