Biden Inauguration to Look Very Different from Past Events

Update Required To play the media you will need to either update your browser to a recent version or update your Flash plugin.
By Dan Friedell
17 January 2021


Hundreds of thousands of people normally attend a new American president's inauguration. But the first day of Joe Biden's presidency will be very different.

Because of the coronavirus crisis, the official presidential swearing-in ceremony – to be held January 20 - was already going to be more low-key.

But after the attack on the U.S. Capitol on January 6, heightened security measures will also be in place and crowds will be further limited. A high-security area is being established around the Capitol, the White House and the National Mall.

The U.S. Secret Service is in charge of the inauguration. Michael Plati is the agent in charge. He said to help deal with possible security threats, there will be increased communication between local and federal police. His agency will also cooperate closely with the Department of Defense and Homeland Security officials. 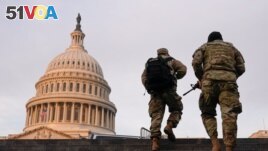 Plati said he sees the inauguration and the attack on the U.S. Capitol as two very different events. For example, he said the inauguration is planned far in advance. Unlike what happened at the Capitol on January 6, agencies have plans in place to prevent possible violence.

In addition to local and federal police officers, there will be 10,000 National Guard soldiers on duty.

Earlier, the coronavirus was the main concern ahead of this year's inauguration. Now, the combination of possible violence and the continued spread of the virus across the U.S. will make this one of the most unusual inaugurations ever.

There will be no large crowds. President-elect Biden will make his way from the Capitol to the White House, but it will not be in the usual public parade. Instead, this will be a virtual event that people can watch online and on television.

Many of the traditional speeches and warm wishes that go along with an inauguration will also be completed online. There will not be a special celebration, known as a ball, that night. That event will also happen online and on television.

Organizers say the events will center around the subject "America United." Throughout his campaign for president, Biden has talked about being a president for all the people and has suggested he will seek to heal a nation divided by major political disputes.

Hollywood actor Tom Hanks will host a special television event to welcome Biden to the White House. Musical performances will be given by Justin Timberlake, Jon Bon Jovi and Demi Lovato.

Here is an example of how few people will attend the inauguration. Usually, each member of congress receives about 40 tickets to be given to friends and supporters from their states to attend.

Under that system, at least 20,000 special visitors were invited to come to the inauguration. This year, each member of congress gets only two tickets. That adds up to just over 1000 guests.

In most years, people without tickets were permitted to watch the ceremony on the National Mall, the large public area that stretches from the Capitol Building to the Lincoln Memorial.

But this year, the National Park Service is urging people to stay home. The Washington Monument, the famous centerpiece that rises above the Mall, will be closed.

There will, however, be a representation of all of the people who usually attend the inauguration. There will be nearly 200,000 U.S. flags planted in the ground, along with a display of 56 high-powered lights. The lights will represent the U.S. states and territories.

One person is definitely staying home: President Donald Trump. The outgoing leader who was impeached for the second time last week has said he will not attend.

Vice President Mike Pence will be there. So will former presidents Barack Obama, George W. Bush and Bill Clinton. Biden will lead the small group to Arlington National Cemetery in Virginia to lay a wreath at the Tomb of the Unknown Soldier.

Tony Allen is in charge of Biden's inaugural committee. He said the goal of this year's inaugural activities is to show the nation "that we are stronger together than we are apart."

Biden is set to take the oath of office on January 20 at noon.

Dan Friedell wrote this story for Learning English based on reporting from the Associated Press and VOA. Bryan Lynn was the editor.

in advance - n. before a particular time

host - n. to be the host, or organizer, of an event

display - n. a collection of objects placed for people to look at

wreath - n. an arrangement of leaves or flowers in the shape of a circle

oath - n. a formal and serious promise to tell the truth or to do something