Update Required To play the media you will need to either update your browser to a recent version or update your Flash plugin.
By Dan Novak
01 July 2021


President Joe Biden met with families and emergency workers affected by the collapse of a building last week near Miami, Florida.

The partial collapse of the 12-story Champlain Towers South condominium building killed at least 18 people. And 145 people are missing. Hundreds of emergency and rescue workers have been searching the debris for signs of life. No one has been rescued since the first hours after the collapse.

Biden met privately on Thursday with friends and family members of those affected by the collapse. He spoke in very personal terms.

Biden said he knew about loss. His first wife Neilia and baby daughter Naomi died in a car accident in 1972. In 2015, his adult son Beau died of brain cancer.

"I just wish there was something I could do to ease the pain," he said in a video posted on Instagram. The video was posted by Jacqueline Patoka, a woman who was close friends with a man and a woman and their daughter who are still missing.

"The people you may have lost — they're gonna be with you your whole life," he told the families. "A part of your soul, a part of who you are." 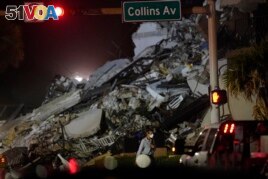 A man walks beside the rubble as rescue efforts continue where a wing of a 12-story beachfront condo building collapsed, Thursday, June 24, 2021, in the Surfside area of Miami.(AP Photo/Gerald Herbert)

Thursday morning the president spoke with Florida Governor Ron DeSantis and Miami-Dade County Mayor Daniella Levine Cava. Biden said that he believed the federal government has "the power to pick up 100 percent of the cost" of the search and cleanup. He urged local officials to look to the federal government for help.

"There's gonna be a lot of pain and anxiety and suffering and even the need for psychological help in the days and months that follow," Biden said. "And so, we're not going anywhere."

The president and first lady Jill Biden's visit came as rescue efforts at the collapse area were halted Thursday. Officials said there was concern about damage to the remaining structure.

Rescue workers noticed several cracks in the building that had gotten larger. Alan Cominsky is the Miami-Dade Fire Rescue Chief. He said a large support hanging from the wreckage moved at least 15 centimeters and "could fall and cause damage" to the support structure in the underground parking area.

Officials also saw movement in pieces of the floor "that could cause additional failure of the building," he said.

Biden also met with emergency workers. They have been working all day and night on a rescue effort that has now lasted a week.

"What you're doing here is incredible, having to deal with the uncertainty," Biden said.

Biden talked about the car crash that killed his first wife and daughter as a moment when he and his family needed emergency workers.

"Until we need you, no one fully appreciates what you do, he said. "But I promise you — we know. We know."

Biden has supported an investigation into the cause of the collapse. In 2018, an engineering report said it had found "major structural damage" in the building. The report also found cracking of concrete supports and walls in the lower level of the building.

While speaking with reporters Thursday, Biden said the families he met were "committed" to knowing what happened to their loved ones and what caused the collapse.

"I walked away impressed by their strength," he said.

condominium — n. a room or set of rooms that is owned by the people who live there and that is part of a larger building containing other similar sets of rooms

psychological — adj. of or relating to the mind

crack ----n. a thin line on the surface of a material that shows it is breaking

committed — adj. willing to give your time, energy, etc., to something

impressed – v. willing to give your time, energy, etc., to something