Update Required To play the media you will need to either update your browser to a recent version or update your Flash plugin.
By Susan Shand
04 May 2021


President Joe Biden officially raised the nation's cap on refugee admissions to 62,500 this year. The action came weeks after Biden faced criticism for his delay in removing the record-low limit set by former President Donald Trump.

Refugee resettlement agencies have waited for Biden to increase the number of refugees permitted into the United States since February 12. That was the day he sent a presidential proposal to Congress saying he planned to do so.

But the presidential proposal went unsigned until Monday. Biden said that before he could sign the plan, he needed to change narrow rules put in place by Trump that had kept out most refugees.

After making the changes, Biden kept in Trump's cap of 15,000 refugees per year. He explained that the limit remained "justified by humanitarian concerns" and was "in the national interest."

That brought strong criticism. The number two Senate Democrat, Dick Durbin of Illinois, called the cap "unacceptable." Within hours, the White House changed the decision. It promised to increase the cap by May 15. It added, however, that it would not meet the 62,500 number the president had promised earlier. In the end, however, Biden said he received additional information that led him to return to that number.

"It is important to take this action today to remove any lingering doubt in the minds of refugees around the world who have suffered so much," Biden stated before signing it.

He said Trump's cap did not represent "America's values as a nation that welcomes and supports refugees."

He also said it was a "sad truth" that the U.S. would not meet the number by the end of the fiscal year in September. That is because of the COVID-19 pandemic and limitations on the country's ability to resettle refugees. He blamed the limitations on the Trump administration's policies. 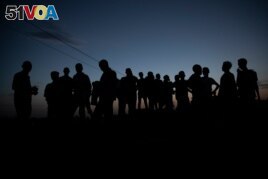 FILE - Refugees who fled the conflict in the Ethiopia's Tigray gather after the sun sets in Hamdayet, eastern Sudan, near the border with Ethiopia, March 23, 2021.

The White House said it was unable to act until now because of the difficulties at the border as young migrants from El Salvador, Guatemala and Honduras continue arriving in large numbers. Supporters of an increase in the number of refugees, including Durbin, accused Biden of playing politics.

Krish O'Mara Vignarajah is the head of Lutheran Immigration and Refugee Service, one of nine resettlement agencies in the U.S. She said her organization is pleased, as are "families all across the world who look to the U.S. for protection."

The United States, she added, is returning to worldwide "humanitarian leadership."

About 35,000 refugees have been approved to enter the United States, with 100,000 others still waiting to be cleared.

cap – n. a limit placed on the amount of something

linger – v. to stay for a long time

doubt – n. a feeling of uncertainty about something

fiscal year – adj. a period of twelve months chosen by a government or business for the purpose of managing its money