Update Required To play the media you will need to either update your browser to a recent version or update your Flash plugin.
By Hai Do
04 March 2020


The once-crowded race for the Democratic Party presidential nomination in the United States has narrowed into a battle between two men. It is widely expected that either Joe Biden or Bernie Sanders will face President Donald Trump, a Republican, in the 2020 election.

Former Vice President Joe Biden won 10 American states in voting on Super Tuesday, including a surprising victory over Bernie Sanders in Texas. Biden won all the southern states along with Minnesota in the midwest and Massachusetts in the northeast.

But Senator Bernie Sanders won the state with the most delegates, California. Sanders also won in the western states of Colorado and Utah and his home state of Vermont. 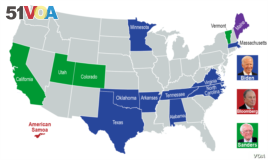 The Associated Press is projecting Joe Biden has won ten of the Democratic Super Tuesday primaries so far, and that Bernie Sanders has won four, including his home state of Vermont and the day's biggest prize, California.

Sanders was considered a heavy favorite to win most of the delegates on Super Tuesday. However, after Biden won the recent primary in South Carolina, several other former candidates announced their support for him.

Former New York City Mayor Mike Bloomberg was the most recent to do so. He ended his brief campaign on Wednesday after poor results on Super Tuesday. The billionaire businessman spent more than $500 million of his own money to buy advertising and set up campaign organizations across the states. His effort resulted in one victory in the territory of American Samoa.

Massachusetts Senator Elizabeth Warren did not win a single state. She came in third even in the state she represents.

It could take weeks or months before Sanders or Biden can earn enough delegates to win the nomination.

On March 4, the Associated Press estimated that Biden is leading the race with 566 delegates and Sanders is close behind with 500. A candidate will need 1,991 delegates in order to win the Democratic Party nomination for president.

The 78-year-old Sanders began his political career as mayor of Burlington, Vermont. In 1990, voters in that state elected him to serve in the U.S. House of Representatives. In 2006, he was elected to the U.S. Senate.

Sanders often describes himself as a "democratic socialist." He has called for free college education for Americans and cancellation of current student loan debts. He wants the government to provide more money to needy seniors and people with disabilities. He also promises to seek free healthcare for everyone in America and supports the "Green New Deal" proposal to replace fossil fuels with reusable energy.

Many young people and working-class Americans support Sanders because of his positions on these issues. Critics question how Sanders will find the money to pay for his plans.

The 77-year-old Joe Biden often reminds supporters of his own working-class family from Scranton, Pennsylvania. At the age of 29, he became a U.S. Senator from the state of Delaware and later served for two terms as vice-president under Barack Obama.

In his third try for the presidency, Biden describes his campaign as "a battle for the soul of America." He says, "It's time to treat each other with dignity. Build a middle class that works for everybody. Fight back against the incredible abuses of power we're seeing."

On Tuesday night, American broadcaster CNN reported that primary voters in Virginia and North Carolina said it was more important to choose a candidate who could beat Trump than one who would agree with them on issues. Biden won both states.

"I'm here to report we are very much alive," Biden said at a campaign gathering in Los Angeles, California, Tuesday night.

For his part, Trump has commented almost daily about the Democratic race. He calls Sanders "Crazy Bernie," and Biden "Sleepy Joe."

As Democrats went to vote on Tuesday, Trump told reporters, "Whoever it is, I don't care. We'll take them on."

The president then added that there was "no question the Democratic establishment is trying to take it away from Sanders. No question in my mind."

primary - n. an election in which members of the same political party run against each other for the chance to run in the larger general election

working class - n. the class of people who are working to earn money and who are not rich or powerful

soul - n. the central or most important part of something that makes it effective, valuable, etc.

dignity - n. the quality of being worthy of honor and respect

stage - n. a place or area of activity that is of great interest to people