Update Required To play the media you will need to either update your browser to a recent version or update your Flash plugin.
By Hai Do
21 July 2022

White House Press Secretary Karine Jean-Pierre said Biden has begun taking Paxlovid. The antiviral drug is designed to reduce the severity of the disease. She added that Biden has been in contact with administration staff by phone and will take part in his planned meetings at the White House on the "phone and Zoom from the residence."

Biden is 79 years old. He is fully vaccinated. He received two shots of the Pfizer vaccine shortly before taking office in January 2021. The president received two more shots, called boosters, last September and in March of this year. 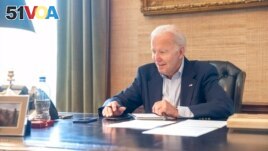 In this image provided by the White House, President Joe Biden speaks on the phone from the Treaty Room in the residence of the White House, July 21, 2022. Biden says he's "doing great" after testing positive for COVID-19.

Biden had planned to visit Pennsylvania on Thursday and spend a long weekend in Delaware. Those events are canceled.

First lady Jill Biden spoke to reporters as she arrived at a school in Detroit, Michigan on Thursday. She said she had just gotten off the phone with her husband. The first lady, who was wearing a face covering, said she tested negative earlier in the day.

For two and a half years, Biden has been able to avoid the virus that has spread around the world. Several world leaders, including former U.S. President Donald Trump, British Prime Minister Boris Johnson and French President Emmanuel Macron, have all gotten the virus.

The virus and its variants have also infected U.S. Vice President Kamala Harris, as well as Cabinet members, White House staff and lawmakers.

The Biden administration has worked to protect the president from COVID-19. All visitors and staff are required to be vaccinated or submit to daily tests. People expected to be near Biden are tested daily.

The president, however, has increasingly stepped up his travel and has returned to holding large indoor events where not everyone is tested.

In his State of the Union speech at the Capitol on March 1, Biden said it was safe for most Americans to resume their normal pre-pandemic activities. "Tonight, I can say we are moving forward safely, back to more normal routines," the president said. "It's time for Americans to get back to work and fill our great downtowns again."

Speaking to more than 2,600 people at the White House Correspondents' Association dinner on April 30, Biden talked about the risks of holding large events. "I know there are questions about whether we should gather here tonight because of COVID," he said. "Well, we're here to show the country that we're getting through this pandemic."

In recent weeks, U.S. officials have again urged Americans to be careful with the fast-spreading Omicron sub-variants, or versions of the disease. The U.S. Centers for Disease Control and Prevention reported that the country still has on average 126,000 new cases of COVID-19 daily. The virus is causing an average of 353 deaths a day in the United States.

The health agency said COVID-19 vaccines reduce the risk of severe illness and death from the disease. It says booster shots, which Biden had received, can help older and other at-risk people.

Dr. Anthony Fauci is the nation's top infectious disease expert. He said on July 12 that COVID-19 "is a reality that we need to deal with." But he added, "We should not let it disrupt our lives."

Zeke Miller and Chris Megerian reported this story for the Associated Press. Hai Do adapted it for VOA Learning English.

positive –n. showing the presence of a virus or condition

symptom –n. a change in the body or mind that shows the presence of a disease

staff –n. workers for a particular organization or company

isolated –adj. alone, separated from others

negative –adj. not showing the presence of a virus or condition

routine –n. a regular way of doing things in a usual order

disrupt –v. to cause a person or group to be unable to carry on in a normal way