Biden to Keep Troops in Germany, End Support for Saudi War in Yemen

Update Required To play the media you will need to either update your browser to a recent version or update your Flash plugin.
By Caty Weaver
04 February 2021


U.S. President Joe Biden said Thursday that he would halt the withdrawal of American troops stationed in Germany and end support for Saudi Arabia's war in Yemen as top foreign policy goals.

In his first visit to the State Department as president, Biden called for a return to the "grounding wire of our global power." He sought to cheer the diplomatic workers with his speech. Many of them had expressed unhappiness over the last several years about the policies and actions of former President Donald Trump.

"America is back. Diplomacy is back," Biden said in brief comments to State Department workers. "You are the center of all that I intend to do. You are the heart of it. We're going to rebuild our alliances." 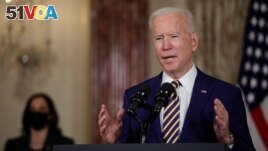 Biden administration officials said the president was hoping to send an unmistakable signal that the U.S. is ready to return to its position as a world leader.

Last year, Trump announced plans to redeploy about 9,500 of the estimated 34,500 U.S. troops stationed in Germany. The country is home to important American military bases, including the headquarters for U.S. European and U.S. Africa Command operations.

Trump announced the withdrawal after repeatedly accusing Germany of not paying enough for its own defense. He described the longtime NATO ally as "delinquent" for failing to spend two percent of its total national product on defense. The provision is part of NATO membership terms.

No reductions or changes have been made to U.S. troop levels since Trump's announcement. The new defense secretary, Lloyd Austin, suggested that he and the German foreign minister would discuss reconsideration of the withdrawal plan, Austin's chief spokesman said.

Biden also announced Thursday that the U.S. would end support for a five-year, Saudi-led military offensive in Yemen. The conflict has deepened suffering in the poor country. Biden called the decision part of restoring a U.S. emphasis on diplomacy, democracy and human rights.

The ending of U.S. support for the offensive will not affect any U.S. operations against the Yemen-based group al Qaida in the Arabian Peninsula group, said national security adviser Jake Sullivan.

Biden called for a cease-fire, an effort to increase humanitarian aid to Yemen and a return to peace talks. He also announced the choice of Timothy Lenderking as special diplomat to Yemen. The career foreign service member has served in Saudi Arabia, Kuwait and other countries in the Middle East.

intend – v. to have in mind as a purpose or goal

delinquent – adj. not paid at the required or expected time

provision – n. a measure taken beforehand to deal with a need

emphasis – n. special importance or attention given to something