Biden: U.S. Will Double Donation of COVID-19 Vaccines to World

Update Required To play the media you will need to either update your browser to a recent version or update your Flash plugin.
By Jill Robbins
22 September 2021


President Joe Biden said Wednesday that the United States is doubling its purchase of Pfizer's COVID-19 vaccines, up to 1 billion shots, to share with the world.

Biden made the announcement at a COVID-19 meeting of world and business leaders and aid groups alongside the U.N. General Assembly. Speaking to the group over video conferencing, Biden said, "We're not going to solve this crisis with half measures or middle of the road ambitions — we need to go big."

The purchase of another 500 million shots brings the total U.S. vaccination guarantee to more than 1.1 billion through 2022. That is more than donations from the rest of the world combined.

However, the latest U.S. donation is only a small part of what will be necessary to meet a goal of vaccinating 70 percent of the world's population by next September. 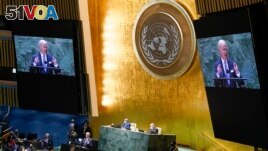 Biden added that the U.S. would also increase the amount of money given to groups and nations that are administering the shots. He also urged other wealthy nations to donate, rather than sell, the shots to poorer nations. And the European Union said the group would donate another 500 million vaccines, a small increase from its earlier plans.

Some have criticized the plans for being too little. Many people in poor nations have not received their first shot while the U.S. is considering additional booster shots to millions of Americans.

About 6 billion COVID-19 vaccines have been administered worldwide to 43 percent of the world's population in the past year. But many poor nations are struggling to vaccinate even those with the most risk of infection. Some have yet to vaccinate more than 2 percent of their population.

Colombian President Iván Duque said Tuesday at the United Nations, "The existing gaps between nations with regard to the vaccination process are unheard of."

The World Health Organization (WHO) says only 15 percent of promised donations of vaccines from rich countries have been delivered. The health agency has said it wants countries to meet the sharing goals "immediately." The WHO especially wants to make the shots available for programs that benefit poor countries and Africa.

COVAX, the U.N.- supported program to ship vaccines to all countries, has struggled to produce and supply vaccines. The WHO has appealed to wealthy countries to delay booster shots so vaccines can be made available to developing countries. As of Tuesday, COVAX had shipped more than 296 million vaccines to 141 countries.

To deal with the supply problem, Biden said the U.S. would work with drug companies and other nations to produce vaccines in their own country.

Zeke Miller reported on this story for the Associated Press. Jill Robbins adapted it for Learning English. Hai Do was the editor.

ambition – n. a particular goal or aim; something that a person hopes to do or achieve

administer – v. to give (a drug, medicine, or treatment) to someone

booster (shot)– n. extra amount of a substance (called a vaccine) that is injected with a needle into a person or animal to help protect against a particular disease

gap – n. a difference between two people, groups, or things — often + between

in regard to – relating to (something)

deliver – v. to do what you say you will do or what people expect you to do; to produce the promised, wanted, or expected results

What do you think of the U.S. promise to send two times as many vaccines to the world? We want to hear from you. Write to us in the Comments Section.