Biden: US Military Efforts in Afghanistan to End in August

Update Required To play the media you will need to either update your browser to a recent version or update your Flash plugin.
By Hai Do
08 July 2021

Speaking from the White House, the president said, "We did not go to Afghanistan to nation build." The U.S. is seeking to end its involvement in the nearly 20-year war.

"It's the right and the responsibility of the Afghan people alone to decide their future and how they want to run their country," Biden said. He added that "Afghan leaders have to come together and drive toward a future." 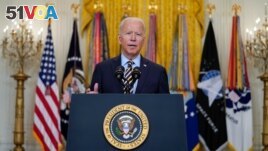 President Joe Biden speaks about the American troop withdrawal from Afghanistan, in the East Room of the White House, in Washington, July 8, 2021.

Biden said 2,500 Afghans who worked with Americans have been given special visas to get out of the country. "Our message to these women and men is clear," Biden said. "There is a home for you in the United States if you so choose. We will stand with you, just as you stood with us."

Last week, the U.S. left the Bagram airfield where U.S. troops and airplanes had launched military operations. Military officials said the withdrawal of U.S. forces was 90 percent complete at the time. About 650 troops remain in Afghanistan to provide security for the U.S. Embassy in the capital of Kabul.

The president said there is no "mission accomplished" moment as the U.S. military mission comes to an end. "The mission was accomplished in that we got Osama bin Laden and terrorism is not emanating from that part of the world," he said.

In 2003, then-President George W. Bush was criticized for declaring an end to fighting in Iraq under a "mission accomplished" sign. The U.S. war in Iraq continued for several years afterward.

Biden explained his decision to end U.S. military operations as the Taliban gained territory in many parts of the Central Asian country. He asked, "How many more, how many more thousands of American daughters and sons are you willing to risk?"

The president added, "I will not send another generation of Americans to war in Afghanistan, with no reasonable expectation of achieving a different outcome."

Answering questions from reporters on Thursday, Biden said that Kabul falling to the Taliban would not be an acceptable outcome. He said he would not trust the Taliban. "But I trust the capacity of the Afghan military, who is better trained, better equipped and more competent," he added.

Last week, the commander of U.S. troops in Afghanistan, General Austin Miller, warned that the country may be headed toward a civil war.

The U.S. had agreed to withdraw in a deal negotiated last year under former President Donald Trump. Biden then overruled military leaders who wanted to keep a larger presence to assist Afghan national forces.

Hai Do wrote this story based on reporting from the Associated Press and Reuters. Mario Ritter Jr. was the editor.

emanate –v. to come out from; to send out

achieve –v. to get; to reach by working hard

competent –adj.having the necessary ability or skills; able to do something well enough