Big Dinosaur from Italy Got Burial at Sea

Update Required To play the media you will need to either update your browser to a recent version or update your Flash plugin.
By George Grow
30 December, 2018


Scientists are studying fossils of a large meat-eating dinosaur they describe as interesting, both in life and in death.

The dinosaur is said to have lived and hunted 198 million years ago in what is now northern Italy.

The fossils were discovered in 1996 close to the village of Saltrio, near Milan, in Italy's northern Lombardy area. They were found in an area where miners cut rock to use for building. This led to a long, difficult process of removing the creature's remains from the surrounding rock.

The scientists reported that the dinosaur, called Saltriovenator zanellai, weighed at least one ton and was 7.5 meters long. They said this means that during the period when it lived, Saltriovenator was the largest-known meat-eating dinosaur that had ever existed.

Its death also was noteworthy.

After dying, Saltriovenator somehow floated into the sea and sank to the bottom. There the remains provided meals to numerous sea creatures before fossilizing, the researchers said.

The bones show marks likely left by attacking sharks and fish. They also show signs of feeding by smaller creatures, such as sea urchins. And there are small holes in the bone apparently left by even smaller marine worms. 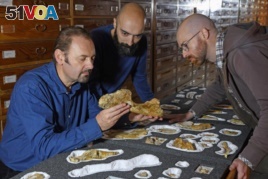 In scientific writings, he said, there are reports of some dinosaur bones being attacked on land by other animals and, more rarely, insects. "At least three kinds of marine animals left those traces on the bones of Saltriovenator," he added.

Dal Sasso led the researchers. Their findings were published earlier this month in the scientific journal PeerJ.

Saltriovenator is the second dinosaur of its kind ever found in Italy. It combined the qualities of early meat-eating dinosaurs with those of more developed ones.

The name Saltriovenator means "hunter from Saltrio." The creature walked on two legs. Each hand had four fingers, three of which possessed claws. Its head was about 80 centimeters long, while its mouth had sharp teeth.

The creature was about 24 years old at the time of death, and still not fully grown. It lived in a coastal environment and likely hunted plant-eating dinosaurs and possibly smaller meat-eating dinosaurs, the researchers said.

Dinosaurs are said to have first appeared on Earth about 230 million years ago during what is known as the Triassic Period. Scientists say the earliest meat-eating dinosaurs were less noticeable than larger non-dinosaur predators that died off by the end of the period.

With the competition gone, meat-eating dinosaurs increased in size during Earth's Jurassic Period.

Will Dunham reported this story for the Associated Press. George Grow adapted his report for VOA Learning English. Mario Ritter Jr. was the editor.

predator – n. something that gets food mainly by killing and eating other organisms

claw – n. a part of an animal that is used for seizing and holding things

unique – adj. being without equal; special

marine – adj. of or related to the sea

fossil – n. mineral remains of an ancient animal or plant