Update Required To play the media you will need to either update your browser to a recent version or update your Flash plugin.
By Dan Friedell
17 August, 2016

Have you ever heard of a "googly-eyed, stubby squid?" Well, you have now.

Scientists working to map the Pacific Ocean floor off the coast of North America found a purple squid with big eyes. The squid is called the Rossia Pacifica. 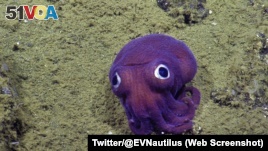 A big-eyed, stubby, purple squid was captured on camera buy a vehicle exploring the ocean floor near California.

It is only about six centimeters long.

The small sea creature was found at a depth of about 900 meters, off the coast of southern California.

Money for the mapping project comes the Ocean Exploration Trust. The trust was the idea of Robert Ballard, who discovered the wreckage of the ship Titanic in 1985.

The scientists making the map are working on a large boat called the Nautilus. The Nautilus has remote-controlled roving vehicles that can explore the ocean floor.

The researchers have a number of cameras, all of which are connected to the boat with fiber-optic cables. When researchers found the brightly colored squid, they were very excited.

You can see the excitement in a video posted to YouTube. It has more than one million views. You can hear the scientists saying "Whoa! What is that? He has weird eyes."

The scientists are laughing. One of them jokingly suggests that the squid is actually a child's toy dropped into the ocean by accident.

It turns out the Rossia Pacifica uses its big eyes to look for shrimp that it can catch for food.

The Nautilus left from Canada in May and will complete its trip in September.

Have you ever seen anything like the purple squid? We want to hear from you. Write to us in the Comments Section or on 51VOA.COM.

squid – n. a sea creature that has a long, thin, soft body and 10 long arms

googly-eyed – adj. having eyes that stick out

remote-controlled – adj. a process or system that makes it possible to control something from a distance by using electronic signals

fiber-optic cable – n. a rope of wires made from thin threads of glass or plastic to carry very large amounts of information in the form of light signals

shrimp – n. a small shellfish that has a long body and legs and that is eaten as food