Update Required To play the media you will need to either update your browser to a recent version or update your Flash plugin.
By Marilyn Christiano
26 April, 2014

Some expressions describe people who are important -- or who at least think they are. One such expression is bigwig.

In the 17th century, important men in Europe began to wear false hair, called wigs. As years passed, wigs began to get bigger. The size of a man's wig depended on how important he was. The more important he was -- or thought he was -- the bigger the wig he wore. Some wigs were so large they covered a man's shoulders or back.

Today, the expression "bigwig" is used to make fun of a person who feels important. People never tell someone he is a bigwig. They only use the expression behind his back.

"Big wheel" is another way to describe an important person. A big wheel may be the head of a company, a political leader, a famous movie star. They are big wheels because they are powerful. What they do affects many people. Big wheels give the orders. Other people carry them out.  As in many machines, a big wheel makes the little wheels turn. 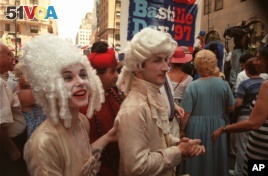 Bigwigs are worn for Bastille Day celebration in New York on July 13, 1997. (AP File photo)
Big wheel became a popular expression after World War II. It probably comes from an expression used for many years by people who fix parts of cars and trucks. They said a person "rolled a big wheel" if he was important and had influence.

The top of something is the highest part. So it is not surprising that top is part of another expression that describes an important person. The expression is top banana. A "top banana" is the leading person in a comedy show. The funniest comedian is called "the top banana." The next is "second banana." And so on.

Why a banana? A comedy act in earlier days often included a part where one of the comedians would hit the others over the head with a soft object. The object was shaped like the yellow fruit: the banana.

Top banana still is used mainly in show business. Yet the expression can also be used to describe the top person in any area.

A "kingpin" is another word for an important person. The expression comes from the game of bowling. The kingpin is the number one pin. If hit correctly with the bowling ball, the kingpin will make all the other nine pins fall. And that is the object of the game.

So, the most important person in a project or business is the kingpin. If the kingpin is removed, the business or project is likely to fail.

Kingpin is often used to describe an important criminal, or the leader of a criminal gang. A newspaper may report, for example, that "police have arrested the suspected kingpin of a car-stealing operation."