Update Required To play the media you will need to either update your browser to a recent version or update your Flash plugin.
By VOA
30 December, 2015


Prosecutors in the U.S. state of Pennsylvania have brought criminal charges against celebrity Bill Cosby.

Cosby, an American comedian, is charged with sexually assaulting a woman in 2004.

The case deals with a former Temple University employee who told police that Cosby drugged and violated her at his home near Philadelphia.

It marks the first criminal case involving Cosby, after many years of accusations. If he is found guilty, he could face up to 10 years in prison and a $25,000 fine. 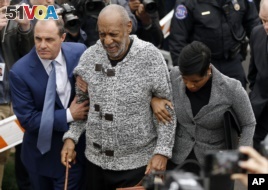 Bill Cosby arrives at court to face a felony charge, Wednesday, Dec. 30, 2015, in Elkins Park, Pa. Cosby was charged Wednesday with drugging and sexually assaulting a woman at his home 12 years ago. (AP Photo/Matt Rourke)

An arrest warrant for the 78-year-old Cosby has been issued.

More than 50 women have accused Cosby of drugging them, and in most cases, sexually assaulting them. Cosby has long denied the accusations.

The statute of limitations in the Pennsylvania case was to expire in January 2016.

The charges have shocked Cosby's fans and damaged his reputation as an entertainer.

Ashley Thompson adapted this story from Reuters materials and VOANews.com reports. Kathleen Struck was the editor.

accusation - n. a claim that someone has done something wrong or illegal

warrant - n. a document issued by a court that gives the police the power to do something