Update Required To play the media you will need to either update your browser to a recent version or update your Flash plugin.
By Ashley Thompson
13 November, 2017

Billionaire Bill Gates has made a $100-million investment to help researchers find a cure for Alzheimer's. The brain disease causes people to slowly lose their memory and mental abilities as they grow old.

Gates, the co-founder of Microsoft, said Monday he has given $50 million to the Dementia Discovery Fund. The London-based fund aims to bring business and government together to seek treatments for the brain-wasting disease.

Another $50 million will go to start-up groups working in Alzheimer's research, Gates said. 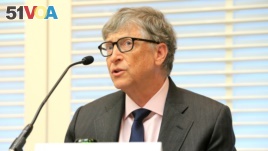 The money is a personal donation and not from his charitable organization, the Bill and Melinda Gates Foundation.

Dementia, of which Alzheimer's is the most common form, affects close to 50 million people worldwide. It is expected to affect more than 131 million by the year 2050, the Alzheimer's Disease International group says.

"It's a huge problem, a growing problem, and the scale of the tragedy - even for the people who stay alive - is very high," Gates told the Reuters news agency.

Despite many years of research, scientists have not found a treatment that can slow the progression of Alzheimer's. Current drugs can do no more than ease some of the effects.

But Gates said he is hopeful that treatments can be found, even if they might still be more than 10 years away.

He said Alzheimer's became his mission partly for personal reasons, and partly because it has been so difficult to find effective treatment. Some men in his family have suffered from Alzheimer's, he said.

In a blog post about the investments, Gates wrote, "I know how awful it is to watch people you love struggle as the disease robs them of their mental capacity. It feels a lot like you're experiencing a gradual death of the person that you knew."

Reuters reported this story. Ashley Thompson adapted it for Learning English. Hai Do was the editor.

dementia - n. a mental illness that causes someone to be unable to think clearly or to understand what is real and what is not real

charitable - adj. done or designed to help people who are poor, sick, etc.

scale - n. the size or level of something especially in comparison to something else

capacity - n. the ability to do something : a mental, emotional, or physical ability

gradual - adj. happening in a slow way over a long period of time