Update Required To play the media you will need to either update your browser to a recent version or update your Flash plugin.
By John Russell
08 June 2022


With its white feathers and blue skin, the Bali mynah has been sought after by collectors for more than a hundred years.

Their capture for sale along with land loss on the island of Bali, Indonesia, led to the bird being listed as "threatened" in 1988. The International Union for Conservation of Nature moved it to "critically endangered" in 1994. And, by 2001, experts estimated only about six Bali mynahs were living in the wild, with thousands in captivity across the world.

Now, conservationists are hoping to increase the mynah population by working with bird breeders and sellers to release them into the wild. 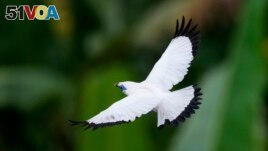 A Bali mynah flies over the trees in Tabanan, Bali, Indonesia on April 17, 2022. Conservationists are working to bring the critically endangered bird back from the brink of extinction with help from bird breeders and tradesmen in Indonesia. (AP Photo/Tatan Syuflana)

In the 1980s, an organization now called BirdLife International started to work with the government to launch a breeding program for the birds.

Breeders can seek government permits to breed the birds. If approved, they are given mynahs by the government and could keep 90 percent of the baby birds for private sale. The remaining birds are released at West Bali National Park, where they will be closely watched by park officials.

Early mynah releases faced problems. Some birds were infected with a parasite that often caused death; others were killed by natural predators. Illegal hunting also continued — and the national park's breeding center was even robbed at gunpoint, with nearly 40 birds stolen.

Squires said, "Bird keepers can still keep birds and follow their hobby without causing real problems for wild populations — which is, I think, a lot better than species going extinct in the world." To go extinct means to die off completely.

Agus Ngurah Krisna Kepakisan is head of the West Bali National Park. He believes the creation and spread of villages around the park have led to a successful breeding program. Villagers received help in getting permits and bred Bali mynahs there.

"With the community being the breeders ... they are helping us to take care of the birds that exist in nature," he said.

Squires noted that there is clear evidence some released birds have produced young ones. "So that leads me to believe that the population is certainly self-sustaining to an extent," he said.

The breeding program's results can be seen throughout the park, where Kepakisan says 420 Bali mynahs now live.

Conservation efforts have also spread to Tabanan Regency — a three-hour drive from the park. The place is a recent release area for Friends of the National Parks Foundation, an Indonesia-based non-profit that works with breeders to release the birds.

I Gede Nyoman Bayu Wirayudha founded the organization and has worked in Bali mynah conservation for years. He said, traditionally, communities around conservation areas have thought there is no money to be made from them. But the rare birds' presence will help draw tourists and their money like in other parts of Bali where mynahs have been released.

"You need to give something back to the community so they can feel that conservation gives them benefits," he said.

Squires hopes the conservation model could be applied to other endangered birds in Indonesia such as the black-winged mynah. "For any of the lowland birds affected by the caged bird trade ... this is the sort of approach that's going to be needed," he said.

Victoria Milko and Andi Jatmiko reported on this story for the Associated Press. John Russell adapted it for VOA Learning English.

critically –adv. relating to or involving a great danger of death; extremely important

hobby –n. an activity that a person does for pleasure when not working

sustain – v. to provide what is needed for (something or someone) to exist, continue, etc.