Honoring the Victims of the Birmingham, Alabama Church Bombing 50 Years Ago

Update Required To play the media you will need to either update your browser to a recent version or update your Flash plugin.
By VOA
23 September, 2013

From VOA Learning English, welcome to As It Is! I'm Steve Ember.

Today we remember a day 50 years ago this month when four African American girls were killed in the bombing of a church in Birmingham, Alabama.

Next, we tell about new research into a method that is helping to control the disease malaria.

But first, we go back to a Sunday in the American South.

Fifty years ago this month, four girls were killed in a bombing at an African-American church in the city of Birmingham, Alabama. Racial hatred led to the attack, which took place on September 15th, 1963. Anger over the crime helped build support for the equal rights campaign.

Students at the Duke Ellington School of the Arts in Washington, D.C. recently observed the event with a staged reading at the John F. Kennedy Center for the Performing Arts. Kelly Jean Kelly reports.

Duke Ellington student Jayme Lawson was one of the performers.

"I learned of the dreams that these girls had. They were each individually their own person, and they wanted to do different things. They had aspirations."

The church where the children died was not only a religious center. It was also a gathering place for civil rights organizers. Whites who supported separation of the races were responsible for the bombing.

Jeff Drew grew up in Birmingham. He says two of the victims were childhood friends.

"These little girls, my classmates, my friends whom I had grown up with, their lives were just snuffed (taken) away because somebody hated the color of their skin. How stupid!"

The attack took place not long after the huge March on Washington. At the march, Martin Luther King gave his powerful "I Have a Dream" speech. Less than three weeks later, the church was bombed.

Time has not healed the pain for Shirley Gavin Floyd. Half a century ago, she was in the same class at school with Addie Mae Collins. She remembers the sadness of other children.

"Kids in the auditorium just started crying. And for a whole week, everywhere you went people were crying."

President Obama has signed legislation awarding the Congressional Gold Medal to the four victims of the attack. To honor them, pieces of colored glass from the church were given to the Smithsonian Institution's National Museum of African American History. The donors were children of Norman Jimerson, a white man and a Christian clergyman. He gathered up pieces of wreckage from the church as evidence hours after the bombing. Other white ministers criticized him for attending funerals for the girls.

Now, Norman Jimerson's son Randall says the objects his father took from the tragedy recall his family's past. He says his father hoped that the objects could also be part of the healing process for both races. I'm Kelly Jean Kelly.

You're listening to As It Is from VOA Learning English. I'm Steve Ember. 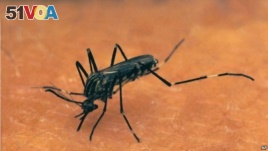 This undated photo supplied by WGBH/Nova shows a mosquito at work.
Attacking mosquitoes early in their development may help with efforts to control malaria. The disease kills an estimated 660,000 people every year, mostly in Asia and in areas south of the Sahara Desert.

One way to prevent malaria is by using mosquito nets treated with long-lasting insecticides. Another way is to spray such chemicals inside buildings. Both methods target adult mosquitoes. However, the insects are developing resistance to the chemicals.

Another method targets mosquito larvae, the young, not yet fully developed mosquito. This method is called larval source management, or LSM.

Lucy Tusting is with the London School of Hygiene and Tropical Medicine. She says the new research is important because a number of African and other countries are using larval source management. However, she says, opinions differ about the value of LSM and where it should be used.

"There's a real lack of consensus on how effective the method can be and in which settings it's appropriate."

Targeting mosquitoes early would seem to be a valuable addition to any control program. But Lucy Tusting says it is not easy to decide whether to use the method.

"First of all, we do have very, very effective existing methods of malaria control. Long-lasting insecticide-treated nets and indoor residual spraying are both highly effective."

She says these methods have been a major reason for the successes in malaria control in recent years. But because of those successes, scientists believe there has been less need to look at other ways to fight the disease. Fewer studies have been organized.

The World Health Organization has released guidelines, suggestions, on the use of LSM. Currently the organization does not support of using larvacides in rural sub-Saharan Africa unless there are conditions that limit the habitats of mosquito larvae

It's As It Is from VOA Learning English. I'm Steve Ember.

That's Tony Bennett with a song written for the 1962 film adaptation of F. Scott Fitzgerald's novel "Tender is the Night." 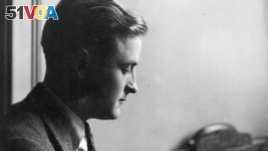 F. Scott Fitzgerald experienced the wild living of the period, yet wrote about its effect on people as though he were just an observer.
Francis Scott Key Fitzgerald was born on September 24th, 1896. We are remembering the anniversary of his birth because, many years after his death, he remains a major American writer.

Fitzgerald wrote books like "The Great Gatsby" and "Tender Is the Night." These books still sell many copies, and they are studied in schools and universities. All were made into Hollywood films, ‘Gatsby' a number of times.

Critics also praise Fitzgerald's short stories. He often wrote about a new kind of American woman – the "flapper." That name noted the beginning of a time of more independence for women.

Fitzgerald gained great literary success and became rich when he just in his 20's. But that success did not create a happy life for him and his wife, Zelda. They traveled the world, moving around continually, spending lots of money and attending party after party. 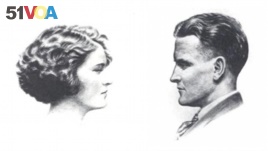 An iconic couple of the 1920s - F Scott and Zelda Fitzgerald
F. Scott Fitzgerald suffered from alcoholism and his wife from mental problems. In 1948, Zelda was killed in a fire in a hospital where she was a patient. Fitzgerald wrote films in Hollywood during his final years. But he did not experience anything comparable to the success of his youth as a writer of classic novels.

F. Scott Fitzgerald died in California of heart disease in 1940. He was 44 years old.

As It Is is a production of VOA Learning English. I'm Steve Ember. Thanks for joining us.
Related Articles
go top