Update Required To play the media you will need to either update your browser to a recent version or update your Flash plugin.
By VOA
27 November, 2015


America's holiday shopping season started on Black Friday, the day after Thanksgiving. It is the busiest shopping day of the year.

Retailers make the most money this time of year, about 20 percent to 30 percent of all revenue all year. The National Retail Federation (NRF) says about 136 million people will shop during the Thanksgiving Holiday weekend.

More and more will shop online. In an era of instant information, shoppers can use their mobile phones to find deals. Nearly 80 percent of this year's holiday shoppers, or about 183.8 million people, will shop on Cyber Monday, says the NRF.

More than half of all holiday purchases will be made online, they say. One-in-five Americans will use a tablet or smartphone.

Pam Goodfellow is an analyst at Prosper Funding LLC. It is an online lender. "Given how shoppers today overall gravitate towards all things digital, there's a high likelihood online shopping will be bigger than ever over the holiday weekend and on Cyber Monday," she told the NRF. 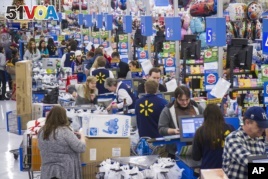 NBC News reported that for many, shopping online was "a more comfortable alternative" than crowded malls.

The shift to online shopping has had a big impact on "brick and mortar" shopping malls. Since 2010, more than 24 shopping malls have closed and an additional 60 are struggling, according to Green Street Advisors. It tracks the mall industry.

However, Fortune says the weakest of the malls have closed. The sector is thriving again, it says. The International Council of Shopping Centers said 94.2 percent of malls were full, or occupied, with shops by the end of 2014. That is the highest level in 27 years.

According to the NRF, the average American consumer will spend about $805 on gifts. That's about $630.5 billion between November and December – an increase of 3.7 percent from last year.

Nonetheless, Cyber Monday is not the biggest online shopping day in the world. That distinction goes to China's Singles' Day, celebrated November 11, which posted record sales of $14.3 billion this year.

Mary Gotschall compiled this story for Learning English with reports from VOA News and other sources. Kathleen Struck was the editor.

retailer – n. a person or business that sells things directly to customers for their own use

mobile – adj. able to be moved

gravitate – v. to be attracted to or toward something or someone

likelihood – n. the chance that something will happen

alternative – n. something that can be chosen instead of something else : a choice or option

mall – n. a large building or group of buildings containing stores of many different kinds and sizes