Update Required To play the media you will need to either update your browser to a recent version or update your Flash plugin.
By Dan Friedell
11 November 2022

They were celebrating the opening of the follow-up to the 2018 film.

The first movie was the top film of that year in the U.S. and Canada and the second-biggest in the world. It sold $1.3 billion in tickets. 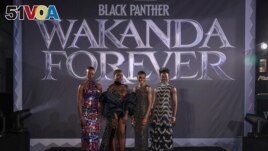 The movie was the first superhero film to have a mostly Black cast.

One of the main actors is Lupita Nyong'o of Kenya. She plays Nakia.

She said the movie from four years ago permitted people to feel good about "indigenous cultures" because of the way it showed African life.

Florence Kasumba was born in Uganda but now lives in Germany. She is also one of the main actors in Wakanda Forever.

As a girl, she said, she would have liked to see movies like Black Panther, "because there are not so many role models."

Kasumba has acted in other superhero movies including Wonder Woman and Captain America.

Ayodeji Aiyesimoju is a professor who studies television and film at Joseph Ayo Babalola University in Nigeria. He said the first Black Panther movie changed the way some people thought about Africa.

"It opened conversations for questions. People were genuinely interested in knowing about the continent," he said.

He said the next step is for movie studios in Hollywood and Britain to do more work with Black actors and African moviemakers.

Some critics, however, said the movie was just a way for large movie companies to make money by showing a fictional African way of life. Disney produced the movie and it is based on characters created by Marvel.

One actor said Africa had an important part in the movie. Danai Gurira played the character Okoye. Her family is from Zimbabwe but she was born in the U.S.

"You have to understand that it was Africa that impacted Black Panther," she said. "The role I play was all about looking at what Africa was and bringing (that) into the world."

superhero –n. an imaginary person in a book, movie or television show who has amazing powers like the ability to fly

cast –n. the actors in a play, TV show or movie

indigenous –n. native to a place

inclusive –adj. including everyone or many different kinds of people

role model –n. someone who another person thinks highly of and tries to be like

fiction –n. written stories about people and events that are not real

character –n. a person in a story, book, play or movie

impact –n. an influence or something that affects something else