Update Required To play the media you will need to either update your browser to a recent version or update your Flash plugin.
By Gregory Stachel
13 July 2021


For years, Black students and faculty members at the University of North Carolina, Chapel Hill, known as UNC, have expressed frustration at the way they are treated. Among other problems, they have said they deal with increased attention from school police. And they have noted that the university has too few Black students and teachers.

Last month, several hundred students at UNC protested what they saw as another example of the school's failure to support students and teachers of color.

The protests started after university leaders first decided not to vote on offering tenure to Nikole Hannah-Jones, a Black American journalist. Tenure gives a lifetime position to a professor. 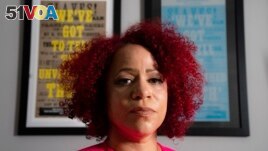 Nikole Hannah-Jones at her home in the Brooklyn borough of New York, Tuesday, July 6, 2021. Hannah-Jones says she will not teach at the University of North Carolina at Chapel Hill following a long fight over tenure. She has accepted a position at Howard University in Washington, D.C. (AP Photo/John Minchillo)

Those involved in the decision not to vote on tenure for Hannah-Jones said they were concerned about her ability to teach. The university had also gotten emails from newspaper publisher Walter Hussman, Jr., for whom the university's journalism school is named. Hussman is a major donor to the school. In his emails, he raised questions about Hannah-Jones' prize-winning work for The New York Times, called The 1619 Project.

Released in 2019, The 1619 Project aims to tell a story of American history with slavery at the center of the country's founding. Some American states have banned schools from using The 1619 Project materials in classrooms.

Black students, Black professors and other professionals criticized UNC's decision not to vote on tenure for Hannah-Jones. They questioned the university's support for free speech and diversity.

The University of North Carolina, Chapel Hill is the oldest public university in the United States, and first began admitting students in 1795. It is considered one of the country's top public universities.

Black students and teachers at UNC say that, without meaningful self-examination and change, the school may be unable to attract students and faculty of color in the future.

Jaci Field is a leader of the Carolina Black Caucus, a faculty group. She said, "Right now, the relationship between the University of North Carolina and its Black students, faculty and staff is broken."

UNC's Black student and faculty groups presented a list of demands to the school at a news conference last week. In a statement Wednesday, UNC Chancellor Kevin Guskiewicz said that he has looked over the proposed list of changes sought by the Black Student Movement. He is asking university leaders to develop a plan to answer those and other concerns.

But Black faculty and students say promises without action will not be enough. The Carolina Black Caucus group earlier said that a growing number of its members are thinking about leaving the university because of recent events.

The events at UNC gained have gained attention across the country.

Irene Mulvey is president of the American Association of University Professors. She said the events could hurt UNC's ability to recruit and keep top researchers.

She said, "I think it's going to be a very long and difficult process to recover, if they can even recover from this. This is a black eye on the University of North Carolina Chapel Hill."

Hannah-Jones was asked if she thought her decision to reject the tenure offer would hurt UNC's ability to find and keep Black students and faculty. She answered the fault would lie with the university if that does happen.

"I didn't create this situation," she said. "So if they're that concerned, they'll do something different."

Annie Ma reported this story for The Associated Press. Gregory Stachel adapted it for VOA Learning English. Ashley Thompson was the editor.

tenure – n. the right to keep a job (especially the job of being a professor at a college or university) for as long as you want to have it