Update Required To play the media you will need to either update your browser to a recent version or update your Flash plugin.
By Gregory Stachel
06 August 2022


Space scientists have observed what they believe is the most massive known example of an object called a neutron star.

It has been called a "black widow" since it gained much of its mass by taking it from another star which it orbits.

The star recently discovered by astronomers turns more than seven hundred times every second. Its mass is 2.35 times greater than our sun. The researchers said the star is close to the highest possible mass for an object of its kind. If it were any more massive it would collapse into a massive black hole. 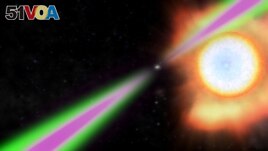 A turning neutron star in this artist's concept of a black widow pulsar. (NASA/Goddard Space Flight Center/Handout via REUTERS)

The researchers published their findings recently in Astrophysical Journal Letters.

A neutron star is the dense, collapsed center, or core, of a massive star that exploded in an event called a supernova. This neutron star is a kind that is highly magnetized, called a pulsar. From Earth, pulsars appear to give off light repeatedly in short moments, like a lighthouse.

Only one other neutron star is known to turn more quickly.

Roger Romani is director of Stanford University's Center for Space Science and Astrophysics in the U.S. state of California. He helped write the research. Romani said, "The heavier the neutron star, the denser the material in its core."

Romani added, "So as the heaviest neutron star known, this object presents the densest material in the observable universe. If it was any heavier it should collapse to a black hole, and then the stuff inside would be behind the event horizon, forever sealed off from any observation."

Scientists use the term "event horizon" to describe a point close to a black hole beyond which nothing can escape including light.

Romani said, "Since we don't yet know how matter works at these densities, the existence of this neutron star is an important probe of these physical extremes."

The star is officially known as PSR J0952-0607. It is about 20,000 light years from Earth. A light year is the distance light travels in a year. The researchers studied it using the Keck I telescope in the state of Hawaii.

Stars that are about eight or more times the sun's mass change the chemical hydrogen into heavier elements. When they build up about 1.4 times the mass of our sun in the element iron, their core collapses into a neutron star.

A neutron star is very small—about the size of a city. But within that small area, it holds more mass than our Sun.

The astronomers call this kind of star a "black widow." The name comes from a kind of spider. The black widow female is known to eat the male after mating. Astronomers call star systems with related qualities "spider binaries."

The star is believed to have started as a neutron star with the usual mass, about 1.4 times that of our sun. But its gravitational pull took material from the star in its system.

That appears to have caused it to gain mass nearing the physical limit. Beyond that limit, scientists say, the star should collapse into a black hole. Black holes are the densest of all known objects.

The other star in the system has lost about 98 percent of its mass to the black widow star. It remains about 20 times the mass of our solar system's largest planet, Jupiter. But far less massive than a normal star.

astronomer –n. a scientist who studies stars, planets, and other objects in outer space

seal – v. to close (something) tightly so that air or liquid cannot get in or out

probe – n. careful examination or investigation of something