Update Required To play the media you will need to either update your browser to a recent version or update your Flash plugin.
By VOA
04 December, 2013

The former British leader described education in the 21 century as a security issue. He made the appeal last month at a meeting of the Security Council's Counter-Terrorism Committee. 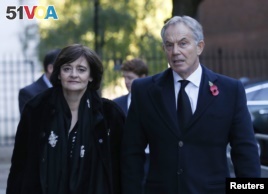 Tony Blair served as prime minister from 1997 to 2007. He currently heads the Tony Blair Faith Foundation. The group seeks to help prevent prejudice, conflict and extremism. It operates tolerance programs in more than 1,000 schools worldwide.

Mr Blair said the world faces extremism based on what he called "a perversion of religious belief." He said this way of thinking abuses religion to justify violence against innocent civilians.

The former prime minister said people like to belong to something. And that belonging can provide a sense of identity. But he believes that misguided sense of belonging can make people think of others who are different as opponents. He said the wide contacts of today deepen and add greatly to extremism, because people now meet many others who differ from themselves.

"The challenge then is to show our young people, who are vulnerable to appeals from terrorists, that there is a better way to live your life, a better path to having your voice heard, a more meaningful way to engage with the world. And we must address the extremists' funding and support so that they have less ability to teach and promote hate, persecution and murder," said Blair.

He also said the Tony Blair Faith Foundation has operated its school programs for 4 years. This Face to Faith program as it is called now reaches 50,000 students between the ages of 12 and 17. Some of the students live in western countries, such as Australia, Canada, Italy and the United States. Others live in Egypt, India, Indonesia, Jordan, Pakistan and Philippines.

Mr Blair said the students learn the skills needed to prevent conflict by breaking down religious and cultural misunderstandings. He says Face to Faith teaches what he calls "religious literacy." Basically, it works, he said, they love it and it changes their minds and the mindsets.

He said many tolerance programs exist, but Mr Blair urged governments to start many more.

"Let the young people in your country experience firsthand an opportunity to learn about the world and to form a relationship with someone far away who may not look like them, but for whom, once they have been schooled in cross-cultural education, they may see themselves in," said Blair.

And he said his Foundation is willing to work in any country that invites it.