The International Football Association's ethics committee banned its president, Sepp Blatter, from the organization for eight years on Monday. The association is known as FIFA.

Also getting an eight-year ban was Michel Platini, the head of the European soccer federation, UEFA.

The ruling came because of a $2 million payment from FIFA to Platini in 2011. The two men called it salary for advising the president. But according to the Associated Press news service, Platini had no such contract with FIFA at the time. 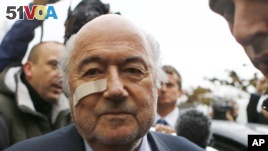 The payment is also being investigated by authorities in Switzerland.

Blatter was already serving a provisional ban over the scandal earlier this year when 14 FIFA officials were arrested on corruption charges.

The organization will elect a new president in February.

For many years, it was anticipated that Platini would take over for Blatter. That is not likely after the news of his eight-year ban. Also, Platini is not on the list of candidates for the upcoming election.

Blatter promised to fight the ban in the Court of Arbitration for Sport.

He denied doing anything wrong by authorizing payments to Platini, calling the lack of a contract an administrative error.

Blatter has been the president of FIFA since 1998.

Lisa Schlein wrote this story for VOANews.com. Dan Friedell adapted it for Learning English with more reporting from the Associated Press. Kathleen Struck was the editor.

How can FIFA recover from this ethics breach? We want to hear from you. Write to us in the Comments section or on 51VOA.COM.

arbitration – n. a process of settling an argument or disagreement in which the people or groups on both sides present their opinions and ideas to a third person or group

authorize – v. to give legal or official approval to or for (something)

ethics– n. rules of behavior based on ideas about what is morally good and bad

provisional – adj. existing or accepted for the present time but likely to be changed