Update Required To play the media you will need to either update your browser to a recent version or update your Flash plugin.
By Bryan Lynn
08 September 2022


U.S. Secretary of State Antony Blinken made an unannounced visit to Kyiv Thursday. He offered $2.2 billion in new military aid to Ukraine and other European countries threatened by Russia.

During his visit, Blinken held talks with Ukrainian President Volodymyr Zelenskyy and other officials.

Blinken said in a statement that the administration of U.S. President Joe Biden had informed Congress of its plans to provide $2.2 billion in long-term military financing. 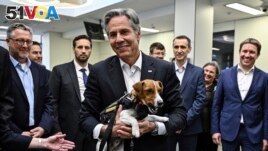 U.S. officials said about $1 billion of the aid will go to Ukraine. The rest will be divided among 18 of its neighbors, including NATO military alliance members and area security partners. The aid will provide loans to countries to permit them to buy weapons and defense equipment made in the U.S.

The countries receiving aid remain "potentially at risk of future Russian aggression," Blinken said in a statement. "President (Joe) Biden has been clear we will support the people of Ukraine for as long as it takes."

It was Blinken's second visit to the Ukrainian capital since Russia invaded the country in February.

White House officials said Biden also spoke by phone with U.S. allies and partners "to underscore our continued support for Ukraine as it defends itself from Russian aggression."

The new military aid is in addition to a separate deal worth $675 million announced earlier Thursday by U.S. Defense Secretary Lloyd Austin during a visit to Ramstein, Germany. That aid covers heavy weapons, ammunition and military vehicles for Ukraine alone.

Zelensky said Ukraine was thankful for America's "enormous support," which he said was helping Ukraine "return our territory and lands."

A State Department official told reporters in Poland before the visit, "All of this security assistance is trying to help ensure that Ukraine is successful in this counteroffensive."

potential – n. a likelihood of changing in the future

underscore – v. to emphasize the importance of something

ensure – v. to make certain that something happens