Update Required To play the media you will need to either update your browser to a recent version or update your Flash plugin.
By Carolyn Mohr
11 May, 2016


Many people like to use their phones or tablets at night before they go to sleep.

However, the light from mobile devices can interfere with sleep. But not all light carries the same risk.

Recent studies have shown that within the light spectrum, blue light can have the worst effect on sleep. 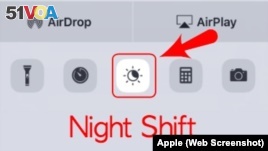 A study in the UK showed that blue light actually can keep sleepy people awake. Tired drivers who were exposed to blue light became as alert as those who drank two cups of coffee.

Blue light filters have been developed for mobile devices to help with sleep issues. Apps are available for Android devices that filter blue light on screens. Updates to the iPhone, iPad and Amazon Fire tablet have added blue light filters.

Twilight is a free app that filters blue light on Android device screens. It can be set to turn on by itself. Or users can turn it on and off when they want.In the app settings, you can change the intensity of the filter, the color and the time the filter turns on and off.

Twilight works across all apps, though some apps may not work fully when Twilight's filter is on.

There is a YouTube video that explains Twilight use.

Twilight is available free for Android devices in the Google Play store.

Apple updated its operating system for iPhone and iPad earlier this year. Included in the update is Night Shift, a blue light filter.

This feature is available on newer iPhones and iPads, including the iPhone 5s and later, and the iPad Air and later.

Night Shift can be set to turn itself on every night or for the user to turn it on and off as wanted.

To turn on Night Shift automatically every night, go to Settings, then Display, then Brightness and then Night Shift.On the Night Shift settings, move the switch to schedule Night Shift. It can be set for Night Shift to go on and off at specific times, or at sunset and sunrise.

In Settings you can also adjust the color of the filter.

The sun and moon icon there identifies Night Shift. Tap it to turn Night Shift on or off at any time.

In an update to Fire tablets at the end of last year, Amazon introduced Blue Shade to filter blue light on screens. Blue Shade is available on more recent Fire tablets.

To turn on Blue Shade on a Fire tablet, swipe down from the top of the screen and tap Blue Shade. To adjust the color, go to Settings, then Display and, finally, Blue Shade.

mobile - adj. able to move from one place to another

spectrum - n. the group of colors that a ray of light can be separated into including red, orange, yellow, green, blue, indigo, and violet : the colors that can be seen in a rainbow

actually - adv. used to refer to what is true or real

expose - v. to cause (someone) to experience something or to be influenced or affected by something

alert - adj. able to think clearly and to notice things

filter - n. a device that prevents some kinds of light, sound, electronic noises, etc., from passing through

app - n. a computer program that performs a particular task (such as word processing)

schedule - v. to plan (something) at a certain time

introduce - v. to make (something) available for the first time