Update Required To play the media you will need to either update your browser to a recent version or update your Flash plugin.
By Alice Bryant
08 December, 2018

Cobalt is a hard, shiny metal that is often mixed with other metals. It is very rare but extremely important to the production of batteries.

Wireless electronics, such as mobile phones, currently use most of the world's cobalt. But a single electric car requires about one-thousand times more cobalt than a mobile phone. 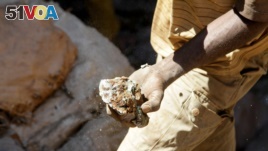 An artisanal miner carries raw ore at Tilwizembe, a former industrial copper-cobalt mine, outside of Kolwezi, the capital city of Lualaba Province in the south of the Democratic Republic of the Congo, June 11, 2016.

Carmakers are hoping to increase sales of electric cars but are struggling to get the metal.

The world's largest known supplies of cobalt are found in the Democratic Republic of the Congo.

BMW said the project is seeking ways to improve working and living conditions in places where the metal is mined through manual labor. The company is working on the project with chemical company BASF, battery maker Samsung SDI and German development agency GIZ.

The project will work on one trial mine within the next three years, BMW said. The company will not directly buy cobalt from the mine, it said. Instead, the mine will be operated by a local cooperative.

BMW said, if effective, the measures could be used to improve systemic problems at other mines as well.

Manual operations are responsible for about 20 percent of the cobalt mined in the DRC. Industrial mining operations account for the rest.

But many companies involved in both kinds of cobalt mining have been accused of environmental, health and safety and human rights violations.

battery – n. a device that is placed inside a machine to supply it with electricity

mobile – adj. able to be moved