Up to 500 Refugees Feared Dead After Boat Sinks

Update Required To play the media you will need to either update your browser to a recent version or update your Flash plugin.
By Dan Friedell
21 April, 2016


The United Nations says that 500 people may have died when their boat sank in the Mediterranean Sea.

On Monday, witnesses and survivors told VOA that a smuggler's boat turned over with about 500 people on board. It happened on April 8.

The Somali government says 200 of its nationals drowned. 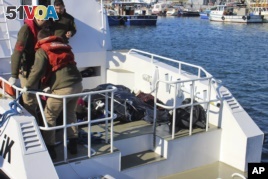 Turkish coast guard officers arrive with bodies of migrants that were drowned as they were trying to reach Greece, at a port near Izmir, Turkey, Jan. 21, 2016.

The United Nations' refugee agency says the boat was bound for Europe from Libya. It carried people from Somalia, Ethiopia, Sudan, Syria and Egypt.

The accident happened somewhere between Libya and Italy as smugglers tried to move some people from a smaller boat to a larger, more crowded boat.

The survivors swam to the original boat and were rescued after drifting in the sea for three days. A large ship took them to Greece.

The United Nations says almost 180,000 refugees and migrants have reached Europe this year. Almost 800 have died or gone missing.

Dan Friedell adapted this story for Learning English based on reporting by VOA. Hai Do was the editor.

What do you think about the cheating by Mitsubishi? We want to know. Write to us in the Comments Section or on 51VOA.COM.

smuggler – n. a person who moves (someone or something) from one country into another illegally and secretly