Update Required To play the media you will need to either update your browser to a recent version or update your Flash plugin.
By Dan Friedell
13 October, 2016

The Swedish Academy said it chose Dylan "for having created new poetic expressions within the great American song tradition."

Some people were excited to see the news.

U.S. President Barack Obama congratulated Dylan on Twitter. He described Dylan as one of his favorite poets.

Others were not sure that a famous and successful musician needed to win a literature prize for his work. They thought the Academy should have picked a writer who would gain new readers because of the award. 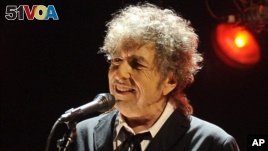 Writer Hari Kunzru tweeted: "we all know his records already."

The Nobel Prize in Literature is worth $906,000. Dylan is the first American to win the prize since writer Toni Morrison won in 1993.

Dylan was born in 1941 in the Midwestern U.S. state of Minnesota. His birth name was Robert Allen Zimmerman. He was raised in a Jewish middle-class family.

Dylan taught himself to play the guitar, harmonica and piano. He first started performing in the late 1950s in coffee shops in his home state.

Dylan moved to New York City in 1959. He hoped to make it in the growing folk music scene in Greenwich Village. Folk musicians of that time mostly performed songs from America's past. However, Dylan began to write his own music.

Some of Dylan's best-known works are from the 1960s. Many of his songs became connected to the anti-Vietnam war and civil rights movements, including his 1963 song "Blowin' in the Wind."

The music publication Rolling Stone released a list of the "100 Greatest Bob Dylan Songs" in honor of his 75th birthday earlier this year.

It considered "Like a Rolling Stone" Dylan's best song. In 2011 the magazine also ranked the song number one on its list of the 500 greatest songs of all time.

Bono is the lead singer for the band U2. He wrote in Rolling Stone that the song is "why every songwriter after him [Dylan] carries his baggage."

Sara Danius is from the Swedish Academy. She announced the prize winner. She said, "Bob Dylan writes poetry for the ear. But it is perfectly fine to read his works as poetry."

She also said people not familiar with Dylan's work should listen to his album "Blonde on Blonde." It came out in 1966. She said the album was an "extraordinary example of his brilliant way of rhyming and his pictorial thinking."

Rolling Stone rated "Blonde on Blonde" as the ninth-best rock music album of all time. It includes songs like "Stuck Inside of Mobile with the Memphis Blues Again," "Just Like a Woman" and "Leopard-Skin Pill-Box Hat."

The ceremony honoring all the Nobel Prize winners will take place December 10 in Stockholm.

What do you think of Bob Dylan winning the Nobel Prize? We want to hear from you. Write to us in the Comments Section or on 51VOA.COM.

tangle – v. to become or to cause something to be twisted together

baggage – n. the feelings, beliefs, problems, or past events that can make life difficult for a person or group

blonde – adj. usually used to refer to yellow or light brown hair of a woman

blues – n. a feeling of sadness or depression