Update Required To play the media you will need to either update your browser to a recent version or update your Flash plugin.
By Jeri Watson
30 December, 2014


Indonesian officials have recovered bodies from the sea near the wreckage of an AirAsia passenger jet. The airplane crashed during a storm on Sunday.

Indonesian television showed rescue helicopters pulling bodies from the Java Sea, in waters about 160 kilometers from Borneo Island. The first images of the bodies showed they were not wearing protective life jackets.

Rescue workers had recovered only about one fourth of the passengers and crew at nightfall. They found the bodies soon after discovering the wreckage. It included what appeared to be an orange life jacket, a red and white emergency door, and other objects. 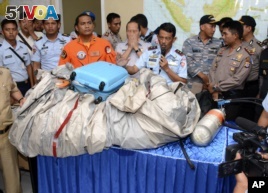 Searches from the air also showed what appeared to be a very large object under the surface of the water. It is believed to be the main body of the airplane.

Late Tuesday, AirAsia confirmed that the wreckage was its lost plane. The passenger jet disappeared on Sunday about halfway through what was supposed to be a two-hour flight from the Indonesian city of Surabaya to Singapore.

The head of AirAsia, Tony Fernandes, said he is, in his words, "absolutely devastated" at the news. Earlier he said on Twitter that his heart "is filled with sadness for all the families involved." He added that, "words cannot express how sorry I am."

A court in Russia has found political activist Alexei Navalny guilty of defrauding a French company of at least $500,000.

The court sentenced the 38-year-old lawyer to a suspended prison sentence of three-and-one-half years. Russian government lawyers had sought a sentence of 10 years. Navalny's brother Oleg was also found guilty. He received the same sentence, but was ordered to jail.

VOA reporter Daniel Schearf said that outside the court, some people were likening the jailing of Oleg Navalny to a tactic used by the former Soviet Union. The goal was to attack the family instead of making a hero of the person Soviet officials wanted to silence.

The court was first supposed to announce judgment on January 15, but moved up the date without explanation. A Facebook page created to organize a protest on that day had attracted tens of thousands of supporters.

Alexei Navalny left the courthouse after the judgment was announced. He urged his supporters to continue their protests. He had been under house arrest since February for taking part in a protest not approved by the government.

He led huge demonstrations against Russian President Vladimir Putin in 2011 and 2012. Navalny was found guilty of financial wrongdoing in July 2013 in an unconnected case and sentenced to five years in prison. But his sentence was suspended several months later.

That same year, he finished in second place in Moscow's mayoral elections.

UN urged Myanmar to give citizenship to Rohingya minority

The United Nations General Assembly has passed a resolution urging Myanmar to give citizenship and equal rights to the country's Rohingya minority.

The General Assembly expressed what it called "serious concern" about Myanmar's treatment of the minority group. Many Rohingya are Muslim.

About 140,000 Rohingya live in dirty, overcrowded camps in Rakhine state. As many as 280 people have died there in religious unrest since June of 2012.

Myanmar, also known as Burma, does not recognize the existence of the Rohingya ethnicity. Instead, government officials and many local people say there are illegal migrants from Bangladesh.

The U.N. resolution urged Myanmar to give Rohingya what it called full citizenship. It also asked that they be permitted to identify themselves as Rohingya. Currently, the government demands that they be called Bangali. The U.N. urged Myanmar to provide Rohingya with "equal access" to services -- and to let them return to their communities with government protection.

This report was based on stories from VOA's News Division. Jeri Watson wrote this newscast for VOA Learning English. George Grow was the editor.

silence – n. a lack of sound or noise