Update Required To play the media you will need to either update your browser to a recent version or update your Flash plugin.
By Jeri Watson
25 September, 2014

The school year has begun in Cameroon. But thousands of students and teachers are fleeing their schools in towns that border Nigeria's Borno state. The state is the home of the Boko Haram terrorist group.

One thousand children were expected to start classes in government schools in the border town of Kolofata. But only a few arrived.

Seventeen-year-old Foncha Rene was one of those who did come to school. He says Boko Haram attacks in the area have frightened away other students. Recent armed conflict between the Nigerian Boko Haram rebels and Cameroon soldiers collapsed the school's walls. 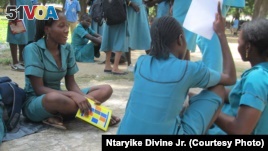 Pamela Singeth works at the government school in Kolofata. She spoke to VOA while taking refuge in a military camp.

Like Kolofata, Mora is also a town on the border with Borno State. Seven hundred students were expected at school there. But only 100 students appeared. And those who arrived found more than 2,000 Nigerian refugees in their school building.

Babila Akao serves as an administrative official for the area. He says, "People are suffering; the situation is a bad situation." He says he is asking the Ministry of Education to postpone the start of the school year.

Kolofata and Mora are just two of the 25 schools on the border with Nigeria's Borno State. Monouna Fotso is Cameroon's secretary of state of the Ministry of Secondary Education. He says the government plans to move students from local schools for security reasons. He says at that time, the government will bring the staff and the students to the new sites. He says the goal of Boko Haram is "to traumatize the citizens."

Over time, Cameroon has worked to extend and improve its educational system. Fourteen years ago, the government began providing free education. The action was part of efforts to increase school attendance. Cameroon is also trying to educate all of the youngest school-age children.

Boko Haram is a threat to Cameroon's students and educational goals. The group has killed, kidnapped and stolen from villages along the 2,000 - kilometer border with Nigeria. The group has gained energy and strength in its fight to establish a government ruled by a religious leader and sharia, Islamic law, in northern Nigeria. Cameroonian and Nigerian military action has failed to stop the violence.

Correspondent Moki Edwin Kindzela reported this story from Kolofata. Jeri Watson wrote it for Learning English, and Caty Weaver was the editor.

frighten – v. to cause great fear

beginning – n. a starting point; the first part of something; adj. involving or learning about the simple or basic parts of a subject

traumatize – v., to cause someone to become very upset in a way that often leads to serious emotional problems.

system – a method of organizing or doing something by following rules or a plan; a group of connected things or parts working together for a common purpose or goal.