Update Required To play the media you will need to either update your browser to a recent version or update your Flash plugin.
By George Grow
11 March, 2017


Bolivians have a new law that nearly doubles the amount of land where coca plants can be legally grown.

President Evo Morales signed the measure into law on Wednesday. "We want to guarantee coca supplies for life," he said.

The measure raises the limit of coca crops Bolivian farmers can plant, from 12,000 hectares to 22,000 hectares. 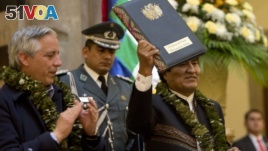 Morales is a former coca farmer. He still leads a coalition of coca farmers in Bolivia's Chapare area.

Coca is the main ingredient in the drug cocaine.

The leaves of the coca plant have been used for many years in South America's Andes Mountains in other ways. Coca can act like a stimulant. People also use it to reduce feelings of hunger and to ease pain and tiredness.

When served as a drink, coca can prevent air sickness.

But it is best known as the main ingredient in a dangerous drug.

United States Drug Enforcement agents were working in Bolivia until Morales expelled them in 2008. He accused them of spying on him and helping the country's opposition.

"The United States just said that Bolivia and Venezuela failed in a demonstrable way in the war against drugs, Morales said during his speech Wednesday. "But the only things that can be demonstrated is that neither Bolivia or Venezuela can submit."

Opposition lawmakers are denouncing the new coca law. They say it will increase cocaine production and increase groups of drug traffickers.

Some labor unions representing coca farmers also oppose the law. They say the crop grown in the Chapare area is not as good as that grown in what they call the "traditional regions." They say it would instead be used in cocaine.

submit –v. to do something without resisting

regions –n. a part of a country that is different from other parts in some way