Update Required To play the media you will need to either update your browser to a recent version or update your Flash plugin.
By John Russell
13 December, 2016


Officials in Turkey say police have detained over 500 people since Monday because of their suspected ties to Kurdish militants.

Members of the Peoples' Democratic Party (HDP), parliament's second largest opposition group, are reported to be among the detained.

Police launched raids across the country after a group called the Kurdistan Freedom Falcons claimed responsibility for two bomb attacks. Turkish officials accuse the group of having ties to the Kurdistan Workers' Party (PKK), which is banned in the country.

The bombs exploded late Saturday near a sports center in Istanbul. The explosions killed at least 44 people and wounded more than 150 others. Officials say the blasts targeted security officials. 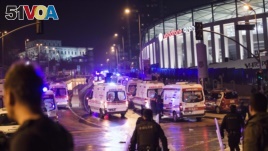 Police officers and ambulances fill the street next to the Besiktas football club stadium, in Istanbul, late Saturday, Dec. 10, 2016.

The government has often accused the HDP of being an extension of the PKK. The top HDP official was among those arrested in Ankara. Other leaders of the party, the second largest opposition group in parliament, are in jail over reported ties to the PKK.

The bombings come after months of fighting between Turkish forces and Kurdish militants.

The Kurdistan Freedom Falcons claim the bombings were meant to answer state violence in the southeast, reported the Associated Press.

Last week, the rights group Amnesty International published a report criticizing Turkey for displacing up to half a million people.

Amnesty International's report focused on Diyarbakir, the main city in the country's southeast. It described months of fighting between the PKK and Turkish security forces in the Sur district.

The writer of the report, Andrew Gardner, said that many people were forced from their houses with very little warning. He noted that in some cases, children have not been able to go to school.

The report claims 24,000 people in Sur were forced from their homes and about 2,000 properties have been destroyed. Under international law, Amnesty says, the government must let people return home.

The mayor of Sur was accused of supporting terrorism, and was removed from office. Bilal Ozkan, the state-appointed replacement, said in October that the government would respect the right to return.

"Our duty is to fix the infrastructure and give it back to the people here. The owner of Diyarbakir is its inhabitants, the owner of Sur are its inhabitants. There is definitely no plan for pushing our citizens further away," Ozkan said.

The Amnesty report said that the Turkish government has taken control of over 60 percent of the Sur district under emergency legislation.

Gardner said there is little evidence that the government plans to honor its promise to let the local population return.

The bombings in Istanbul mean that a quick return for the district's inhabitants is even less likely.

Aline Barros, Isabela Cocoli and Dorian Jones reported on this story for VOANews. Additional information from AP and Reuters was used. John Russell adapted these reports for Learning English. George Grow was the editor.

displace -- v. to force (people or animals) to leave the area where they live

infrastructure – n. the system of roads and other public services in a country or state

inhabitants – n. people who occupy a place for a long period