Bond Is Back in Movie Theaters with ‘No Time to Die’

Update Required To play the media you will need to either update your browser to a recent version or update your Flash plugin.
By Dan Novak
01 October 2021


The James Bond film No Time To Die held its world premiere in London on Tuesday. Celebrities and members of the British royal family attended the city's biggest movie event since the start of the pandemic.

No Time To Die, the 25th Bond movie, has been delayed three times since its original April 2020 premiere date. Because of the pandemic, movie theaters around the world closed or limited the number of people who could attend. 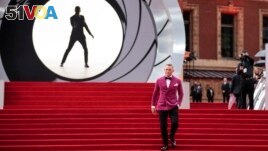 Daniel Craig poses for photographers upon arrival for the World premiere of the film 'No Time To Die', in London Tuesday, Sept. 28, 2021. (AP Photo/Matt Dunham)

The Universal Pictures and MGM film is Craig's fifth and final movie as the suave British secret agent. His first time playing Bond was in 2006's Casino Royale.

"It's such a great relief," Craig told Reuters. "It was so important to me to come and celebrate with all the other cast and crew and to get it into the cinemas, and we're here."

He added that, "A year ago, I didn't think that was going to happen."

No Time To Die sees Bond come out of retirement from a peaceful life in Jamaica to help catch a new villain, played by Oscar winner Rami Malek. It also introduces new character Nomi, a 00 agent, played by Lynch.

The film cost an estimated $200 million to produce.

No Time To Die is among the most anticipated movies coming out this autumn.

"I know the world is expecting this film," said Seydoux. She is returning in the role of Madeleine Swann from the last Bond film, Spectre.

"We tried to give the best, we gave everything to this film ... and I hope people will love it," Seydoux said.

The movie has so far seen strong reviews from critics.

It was "better than good," he wrote, "it's magnificent."

suave — adj. behaving in a relaxed, confident, and pleasant way in social situations

relief — n. a pleasant and relaxed feeling that someone has when something unpleasant stops or does not happen

cast — n. the actors in a play, film, or television show

villain – n. a character in a story, movie, etc., who does bad things

anticipated — v. to think of (something that will or might happen in the future)