Boosters Key to Fight Omicron, But Lots Still to Learn

Update Required To play the media you will need to either update your browser to a recent version or update your Flash plugin.
By Dan Novak
25 December 2021


The new Omicron variant has already shown how easily it infects people. But scientists do not yet know if it also causes more severe disease.

"Everything is riskier now because Omicron is so much more contagious," said Dr. S. Wesley Long. He heads the testing lab at Houston Methodist Hospital.

Omicron now is the number one variant in the United States, health officials said Monday. About three-quarters of new infections last week were from Omicron. 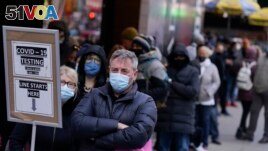 FILE - People wait in line at a COVID-19 testing site in Times Square, New York City, Dec. 13, 2021. Omicron has raced ahead of other variants and is now the dominant version of the coronavirus in the United States.

Public health officials are surprised at how quickly Omicron became the number one cause of COVID-19 infection. After just three weeks, Omicron makes up 80 percent of new symptomatic cases found by Houston Methodist. Long said it took the Delta variant three months to reach that level.

The variant has come at a bad time. Travel is increasing for the holidays, and people have started gathering. But what the arrival of Omicron will mean for the world is still unclear.

Here is the latest on what is known and what is still to learn about Omicron:

How much protections do vaccines provide?

Vaccines in the U.S. and around the world do not offer as much protection against Omicron as they have against other variants. But vaccines still help a lot.

And lab tests show that two shots may not be strong enough to prevent infection. But a booster shot of either the Pfizer or Moderna vaccine can fight off Omicron.

Antibodies produced by the vaccine naturally drop over time. The booster shot raises them back up again. But it is unclear how many antibodies are needed to fight off Omicron. The booster provides 20 percent less protection against an Omicron infection than a Delta infection, said Dr. Egon Ozer of Northwestern University.

But experts say that while the virus may infect someone who has been vaccinated, the booster protects against severe infection.

"The vaccines are going to protect you against severe disease, hospitalization and death," said Long. "And that's really the most important thing."

Having already suffered a COVID-19 infection does not appear to offer much protection against Omicron. However, as with vaccination, it may reduce the chances of severe illness.

In South Africa, Omicron has already spread widely. Scientists reported a jump in reinfections that they had not seen from the two previous variants.

In Britain, a report from the Imperial College of London on Friday found the risk of reinfection from Omicron was five times higher compared to the earlier Delta variant.

Health experts say anyone who has had COVID-19 still should get vaccinated.

Why does Omicron spread so fast?

Scientists are trying to figure out what makes Omicron so contagious.

Researchers in Hong Kong recently reported that Omicron may spread more quickly in the lungs than Delta spread, but it does not spread as deep in the lungs as Delta.

What scientists cannot measure is human behavior. Many places have been easing pandemic restrictions, which has helped the virus to spread. Also, winter has forced gatherings indoors, and travel has increased just as Omicron began spreading.

Early reports from South Africa suggested milder illness. But doctors were unsure whether that is because the population is younger. The British study also found no evidence that Omicron has been milder than Delta, even in young adults.

Dr. Jacob Lemieux researches variants for a group led by Harvard Medical School. "There's a hint, and I think many of us are hopeful, that Omicron will be less severe," he said.

Who is most at risk?

Based on other variants, scientists think that older people, and those with underlying health conditions are more likely to have severe disease.

"I don't think it's going to be any different" than other variants, said Dr. Carlos del Rio of Emory University.

During the holidays, experts agree that in addition to getting vaccinated and boosted, people should take basic safety measures: wear face coverings, avoid crowds, and practice social distancing.

The Associated Press reported this story. Dan Novak adapted it for VOA Learning English. Susan Shand was the editor.

variant — n. something that is different in some way from others of the same kind

contagious — adj. able to be passed from one person or animal to another by touching

booster — n. an additional amount of something that strengthens an earlier treatment, such as a vaccination

antibody — n. a substance produced by the body to fight disease

hint — n. a small piece of information that helps you guess an answer or do something more easily