Update Required To play the media you will need to either update your browser to a recent version or update your Flash plugin.
By Dan Friedell
23 December 2022


Hundreds of children in Bosnia-Herzegovina are working on a project that will make children living through the war in Ukraine smile this winter.

The Bosnian children have been filling small boxes with warm clothes, toys, candies and other simple gifts to be sent to the children of Ukraine for the holidays.

They are working on a project started by the War Childhood Museum in Sarajevo. The museum collects and saves personal records and items from children affected by the war in the former Yugoslavia in the 1990s. 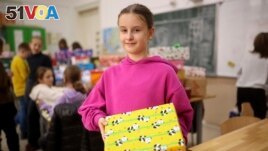 Jasminko Halilovic is the founder and director of the museum. He said its collection includes gifts donated by the people who had received them while growing up in wartime Bosnia. So, Halilovic said the museum wanted "to do something good ... to do something for children of Ukraine."

Sara Nur Spahic is an 11-year-old student at a school in Sarajevo. She said, "when I told my dad that we will prepare gifts for children in Ukraine, he told me how happy such gifts had made (him and his friends) feel when they received them," during the Bosnian war.

Spahic added, "I hope the children in Ukraine will be equally happy," while writing notes for the gifts.

Another student, Tarik Kulenovic said he put in small things that can be easily carried like candies and toys because the Ukrainian children "often must flee their homes within minutes ... to seek shelter in basements and subway stations."

Elvira Velic-Muftic is a teacher at the Savfet Beg Basagic primary school in Sarajevo. She was older during the war 30 years ago, but she remembers her experience, too. She said working on the gift boxes for Ukrainian children had her thinking about the days she spent teaching children who could not leave Sarajevo.

Many of her current students have also heard from their parents about their experiences during the war. Because of that, she said, they can understand how the Ukrainian children must feel. Russia started its attacks on Ukraine in late February, about 10 months ago.

"I believe that receiving these gifts will make the children much happier because they will know someone is thinking of them," Velic-Muftic said.

Mirela Geko works at the museum. She remembered a gift box she received in 1993 at age 5. It came from a 7-year-old Bosnian refugee living in Denmark.

Geko called it "a box of wonders." It included paper, pencils, crayons and sweet-tasting toothpaste for children.

She said, "It made me unbelievably happy, as if the war had stopped for a moment and only wonderful things were happening to me."

candy –n. a sweet food made with sugar or chocolate

wonders –n. something or someone that is very surprising, beautiful, amazing, etc.

crayon –n. a stick of colored wax that is used for drawing

toothpaste –n. a substance that is used for cleaning teeth

basement – n. the part of a building that is entirely or partly below the ground

subway – n. a system of underground trains in a city