Update Required To play the media you will need to either update your browser to a recent version or update your Flash plugin.
By Jerilyn Watson
18 September, 2014

The state is home to many native plants. They include 1,200 species, 90 percent of which are not found anywhere else in the world. But Hawaii also has become the endangered species capital of the United States. Nearly 40 percent of the plants on that endangered list grow in Hawaii.

Its natural heritage has been disappearing because plants and animals from other areas have invaded. Experts also blame agriculture, development and natural events that cannot be predicted.

Field plant expert Steve Perlman has led protection of Hawaii's endangered species for more than 40 years. He is one of the state's first ‘rock star' botanists. In the 1970s, he rappelled using ropes around his body to swing down from high cliffs to save the Brighamia insignis. People call this rare Hawaiian plant Alula.

"A lot of the botanists in the old days, at least for the first couple hundred years working in Hawaii, would be able to hike around the ridges and the valleys and find their species. But no one had ever really looked at the cliffs."

Then Mr. Perlman started to use those same methods of climbing and hanging from cliffs to get to other plants. 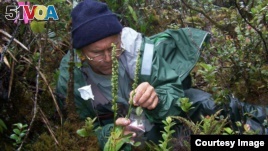 Botanist Steve Perlman collects seeds from of the few remaining Platanthera holochila, a native orchid species which is on the Plant Extinction Prevention program's target list. (Photo by ?Hank Oppenheimer)

He is now in his 60s. But he is still rappelling off cliffs to save endangered plants. The rescued plants are varieties, or kinds, that have established themselves in places where hungry animals like goats and pigs could not get them. He says it is worth it to see a species survive.

"We know the Amazon is losing all these species. But Hawaii is losing species. There's an extinction crisis going on here, and we've already had over 100 species go extinct."

After a long career as a field botanist at the National Tropical Botanical Garden, he is now the statewide specialist for Hawaii's Plant Extinction Prevention Program. The program centers on protecting species with fewer than 50 plants remaining in the wild.

"This Plant Extinction Prevention Program is putting thousands of native plants, critically endangered plants, back out into the areas on the islands where they grew. And we're seeing that success."

'Garden in the Sea' from The National Tropical Botanical Garden

Mr. Perlman also continues to discover new species through his work. The Hibiscadelphus trees are one example he and others found growing in a steep valley on the island of Maui. His explorations often take him to places that have not been touched. He recalls an especially memorable trip to the highest point on the island of Moloka'i.

"It's like being someone like a Charles Darwin who's just gotten to come to an island that no one's ever been to. And everything is interesting: the birds, the insects, the plants. And you're like the first person in this kind of place. We may rediscover something old, or we may find something brand new. And so it's like the age of discovery is not really over."

This story is based on a report by Heidi Chang and was adapted by Jerilyn Watson.

native n., born or grown in a particular place

invaded v., entered an area by force. In this story, plants not known in Hawaii began growing in the state and killed off some native Hawaiian plants

botanist n., an expert in the science of plants

disappear v., to become unseen, to no longer exist

extinction n., the state or situation that results when something (such as a plant or animal species) has died out completely

Now it's your turn to use these words.

In the comment section, write a sentence using one of these words and we will provide feedback on the use of vocabulary and grammar.