Update Required To play the media you will need to either update your browser to a recent version or update your Flash plugin.
By Anna Matteo
25 December 2021

In some places around the world, the day after Christmas is called Boxing Day. In Britain, Australia, Canada and other places, Boxing Day is a national holiday.

There are several thoughts on how the holiday became known as Boxing Day. The Associated Press wrote about the origins of the name back in 2019. 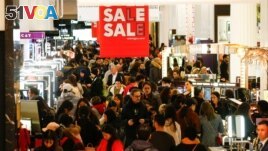 Shoppers are seen inside the Selfridges store on Oxford Street during the Boxing Day sales in central London, Britain December 26, 2018.

The most widely held understanding of the origins of Boxing Day comes from a tradition among wealthy people. They would give a "Christmas Box" to their servants and other workers. The box would contain money and gifts. Traditionally, these workers would also have Boxing Day off to rest.

The AP story says the start of Boxing Day may even date back to the times of the Romans. Some experts say Roman invaders brought the practice to Britain. The tradition was then taken up by churches. Churches would put boxes outside their doors to collect money for the poor. This tradition gained popularity during the middle 1800s and continues to this day.

Boxing Day is still celebrated today in many countries around the world. However, the United States is not one of them. We don't generally have the day off.

But the Christmas holiday, which takes place the day before, is often filled with boxes. Boxes are useful for storing and containing all kinds of things – especially gifts! It is fun to shake a gift box and try to guess what is inside. But an empty box can be just as much fun. Just ask any child ... or any cat, for that matter. Personally, I cannot walk by a cardboard box without thinking of what I could make out of it.

A child can enjoy the box their gift came in as much as, if not more than, the gift itself. An empty box can lead to imaginative play. It can become anything! It can be a secret house in the forest or a boat on the open sea or a rocket ship flying through space!

That is because children are masters at "thinking outside the box." To think outside the box means to explore ideas and consider solutions that are creative and unusual.

Someone who thinks outside the box is not limited or controlled by rules or tradition. Another way of saying this is that they are not "boxed in" by such rules and traditions. They think of new ways to solve a problem.

To be "boxed in" can also mean being physically prevented from moving. For example, a car can "box in" another car in a parking space, .

And that's all the time we have for this Words and Their Stories. Until next time...

origin – n. the rise or beginning from a source

church – n. a building for public and especially Christian worship

cardboard – n. a material made from cellulose fiber (such as wood pulp) like paper but usually thicker